UPDATE: Flower Fields is located in Spencerport. Owner and operator, Nellie Gardner, tells us that she has a self-service shop that is open during the summer. She also sells wholesale and delivers to Rochester florists. Although she is very busy running a farm and a business, Nellie does do group tours of the property, by appointment only. If you’re interested in learning more about the property or arranging a tour, please contact Nellie.

Last week I had the pleasure of seeing a house and a landscape rising like a phoenix from the rubble that was there almost three years ago. In its heyday, it was the Stettner Farm, a thriving flower growing and seed production business. Today, it is being rescued by Nellie Gardner, owner of Flower Fields, a cut-flower business formerly located in Batavia.

What makes this property so remarkable is that the house, built in 1836, was the former 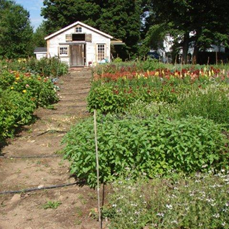 home of the last person to work the Stettner Farm before it was sold to the owners previous to Nellie. The Stettners grew flowers and seeds for the Joseph Harris Seed Company, and sold cut flowers as well, which places them among the ranks of those who contributed to the Rochester region’s rich horticultural legacy. Mr. Stettner was still alive when his former home changed hands. He was delighted with the prospect of a flower business occupying fields that once grew his family’s own plants and he graciously wrote out a history of the farm from his recollections. If the magnificent sugar maple tree near the driveway, which may be over 300 years old, could talk, it would undoubtedly have interesting tales to tell.

To hear the description of the state of the property before work began is beyond belief. The roof leaked, the ceilings were caving in, the water pipes were plugged with lime scale and debris cluttered the property. The windows had deteriorated beyond usefulness and raccoons were living in the attic. Floors were covered with rotting carpets and cardboard, as well as more recently applied flooring materials. Nellie removed these to reveal original flooring that she her friend John repaired and refinished. Some of the outside walls were open to the weather because English ivy covered the side of the house, climbed to the rafters and rotted the walls.

Trees had fallen and lay where they had landed. Grape vines had engulfed the small barn and had started climbing a nearby maple tree. English ivy had covered much of the area where flowers are growing once again. Weedy trees like box elders were growing too, shading potential garden space. Shrubs had been allowed to grow way beyond their intended bounds which made walking around the house challenging. And, the oval in-ground pool had been used by the previous owners as a garbage dump requiring considerable effort to empty it of debris.

Now, thanks to Nellie’s hard work and tenacity, John’s rebuilding ability, and ReHouse Architectural Salvage for authentic parts, the house and grounds are once again an attraction for people interested in historic houses and landscapes alike. There is a new roof on the house. The side porch has been rebuilt. Every ceiling on the interior has been repaired. Original floors of solid oak and pine are visible at last. Walls have been plastered and repainted. There are small gardens filled with perennials and herbs and the pool has been filled in with a lovely perennial garden. There is a new roof on the barn where Nellie works on her floral creations and sells cut flowers. The small field behind the barn is now a productive source of specialty cut flowers, greenery and seed pods, and best of all, history is repeating itself in this resurrection of a horticultural business on the Stettner Farm.

Beverly is the Horticulturist at The Landmark Society.