In late November 2011, North American Breweries submitted plans to the City of Rochester for review to demolish two vacant former brewery buildings at 13 Cataract Street, on the Brewery’s campus. 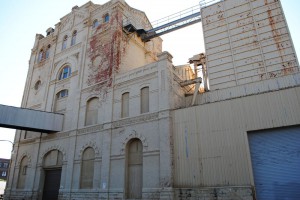 The demolition of the two buildings is proposed as part of a $2.6 million project to create a visitors center, museum, microbewery, and tasting room in another historic building adjacent to the Pont de Rennes bridge at 25 Cataract St. As part of this plan, 13 Cataract St. would be replaced with additional parking and green space.

13 Cataract St. is eligible for listing in the National Register of Historic Places. The buildings are also listed by the City of Rochester as “Designated Buildings of Historic Value.” What does this mean? Section 120-65B of the City’s Zoning Code prohibits the demolition of designated buildings of historic value thus the applicant must obtain an area variance from the Zoning Board of Appeals.

Both buildings are historically and architecturally significant. The larger, 19th century building was designed by a prominent, nationally recognized architect, AC Wagner of Philadelphia.

Both buildings have also been vacant for a number of years. The larger building is in need of significant rehabilitation, however, it is not beyond repair.

The Landmark Society believes that the buildings at 13 Cataract St. deserve strong efforts to preserve them. As National Register eligible buildings, as physical manifestations of Rochester’s brewing history, as potential magnets to bring visitors across the bridge from High Falls, and as potential catalysts for redevelopment and investment in the neighborhood, both are significant. The larger building, in particular, is unique and irreplaceable.

While stabilizing and/or rehabilitating 13 Cataract will require significant investment, North American Breweries will likely spend more money demolishing the structures than they would stabilizing them. The Landmark Society believes that the brewery has put too tight a timetable on this project without sufficiently exploring alternatives.

The Landmark Society and other interested organizations such as the Rochester Regional Community Design Center need more time to explore these options.

What can you do?

For additional information, see some of the local press coverage and links below:

savecataract.com – A new website devoted entirely to 13 Cataract St. The site is a treasure trove of historical documents, articles, and images.