A guest post by Katie Eggers Comeau, Architectural Historian at Bero Architecture, PLLC (Katie also serves on The Landmark Society’s Olmsted Subcommittee and the board of the National Association for Olmsted Parks)

This post is my long-overdue report on my spring break trip to Detroit!  I went for my first meeting as a board member of the National Association for Olmsted Parks (NAOP) – and since the meeting happened to coincide with my children’s school vacation, we made it a family trip (and threw in a few days in Chicago).

According to its mission statement, NAOP “advances Olmsted principles and legacy of irreplaceable parks and landscapes that revitalize communities and enrich people’s lives.”  The board is made up of design professionals, parks advocates, conservancy leaders, scholars and others focused on protecting and promoting the hundreds of parks in this country and Canada designed by Frederick Law Olmsted, Sr., his nephew John C. Olmsted, his son Frederick Law Olmsted, Jr., and the Olmsted firm.

As you may know, Rochester is one of just four cities in the U.S. for which Frederick Law Olmsted, Sr. designed a complete park system.  (The others are Buffalo, Boston, and Louisville.)  The Landmark Society’s Olmsted Subcommittee, which I joined as a member after having staffed the committee for several years, is working to promote awareness for and appreciation of our remarkable Olmsted parks, and kindly sponsored my nomination to the NAOP board.

My first NAOP board meeting was a flurry of introductions, committee meetings, and, best of all, tours!  I sat in on all the committee meetings I could in order to get a sense of what the organization is doing, and it is a very impressive slate of activities.  NAOP is responsible for publishing the Frederick Law Olmsted Papers, a massive, multi-volume undertaking several decades in the making and nearing completion.  In addition, the organization is sponsoring a project to map Olmsted (in this case John C.) parks in the state of Washington, and is planning a two-part symposium on the work of Frederick Law Olmsted Jr. for fall 2013 and spring 2014.

NAOP also offers assistance to people who need the backing of a national organization in their own efforts to save an Olmsted park from inappropriate alteration or destruction.  Given my preservation advocacy background, I agreed to join the Advocacy committee, and I’m excited to work with accomplished colleagues from around the country to ensure that local activists have access to the tools they need to argue for protection of their local Olmsted legacy.

Having never been to Detroit, I particularly enjoyed the special tours of Detroit and its Olmsted park that were part of the weekend’s activities.  The first was an afternoon in the company of an enthusiastic guide, Jeanette Pierce, who started an organization called D:hive Detroit to educate Detroit-area residents and visitors about the good things going on downtown.  Jeanette is an ideal ambassador for her city who works hard to showcase the success stories and counteract the overwhelmingly negative press Detroit tends to get.

We saw some great stuff – the spectacular 1929 Guardian Building (an Art Deco fantasy in downtown Detroit), 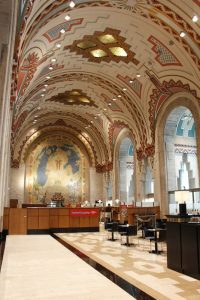 the up-and-coming Midtown neighborhood, the elegant Indian Village homes of former auto barons, and the Heidelberg Project were highlights.  At the same time, Detroit is a cautionary tale about a city that spread itself unsustainably thin, then experienced vast swaths of abandonment when the city lost population.  We saw plenty of vacant land (some being admirably reclaimed for farming, art installations, or parkland, but much simply lying vacant) and a stunning number of vacant buildings.  Despite the problems, Jeanette is optimistic, noting that the city is experiencing population growth in the college-educated, under-40 demographic, and showed us lively downtown bars and restaurants, new Midtown housing, and new small local businesses. 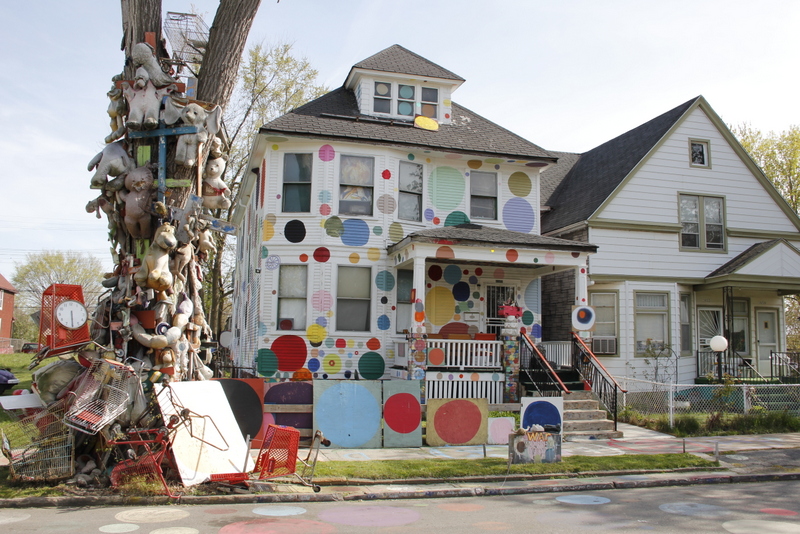 The following day, when our meetings were over, we were treated to an insider’s tour of 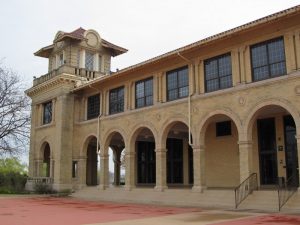 Belle Isle Park, Detroit’s Olmsted park.  As the name suggests, the park is on an island, and for generations has served as an important point for Detroit residents to relax and play.  The Olmsted plan for the park included whimsical features, with a straight Central Avenue flanked by gently winding canals that Olmsted called “rigolettes” and an improbably long, sinuous ferry terminal hugging one curving end of the island (the rigolettes were not built; a smaller, still curving building was built but does not survive).  One part of the island was to be formally developed, while the other was to exhibit a wilder state, with a substantial forest, a naturalistic lake, and irregularly winding canals.

As you no doubt have heard, Detroit’s financial situation is dire, and budget cuts have hit the park hard.  The charming Belle Isle Aquarium closed several years ago due to a lack of funding; park staffing is insufficient to keep restrooms open.  On the bright side, the Belle Isle Conservancy was formed early this year by a merger of four separate groups working on different aspects of the park; this new group hopes to speak with a single voice to raise funds and keep an eye on threats.  Dedicated volunteers and the handful of remaining staff work valiantly to keep the park as tidy as possible given severe budgetary constraints.

As the lone Rochester representative on the NAOP Board, I look forward to being a conduit for information between our community and the international (one board member hails from Montreal) network of Olmsted enthusiasts.  We can learn a lot from what our counterparts are doing in Atlanta, Seattle, St. Louis, Buffalo, Boston, and all the other cities represented on the board, and in turn we can share our experiences with advocacy for Seneca Park and other efforts to promote and celebrate our magnificent Olmsted parks.