Keeping score? We are—here’s the latest on several preservation issues around the region. 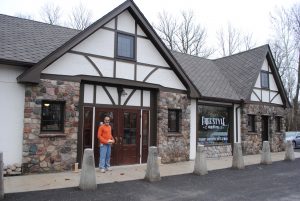 Originally built in 1931 as a Kendall Service Station, this distinctive Tudor Revival structure is one of only two surviving examples of this style of service station in Monroe County (the other is located at 3108 East Avenue in the town of Brighton). Located on a major state highway, it provided gasoline and repair services during the early decades of automobile travel. With the development of improved roadways and expanded motor car travel, standardize service stations were erected in both urban and rural areas. Petroleum companies often designed these stations to blend in with the surrounding residential neighborhoods. Built to resemble a small house, the Mumford service station is an excellent example of this marketing strategy. Its stucco and half-timber details recall the popular Tudor Revival style used in many 20th century residential designs. Although the service station closed several years ago, it was recently purchased by new owners, who are rehabilitating it for retail use. 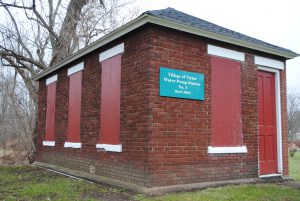 In 1905, the village of Victor began creating its first municipal water system, sourced by two large springs on East Main Street. In 1924, a modern brick pump house was erected on School Street. This pump station, the only one of its kind in the village, continued to operate, supplying water to village residents until 1990, when increased residential and business development and the combination of the local springs forced village officials to find a new water source—the Monroe County Water Authority. With this major change to the village water system, the School Street pump station became obsolete. Due to its historical and cultural significance, however, the pump house has been repaired via funds provided by the local government. With its location next to a branch of the Victor Hiking Trails, there are future opportunities for re-use of the pump house as an interpretive site and rest room facility. 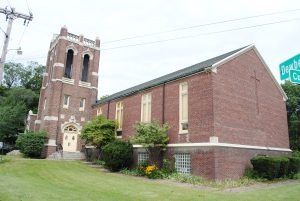 These two churches in Irondequoit were demolished earlier this year. Located across the street from each other, their campuses featured the two, largest, public buildings in the Sea Breeze-Durand Eastman neighborhood. The history of this area dates back to the turn of the 20th century, when street car transportation brought thousands of residents to nearby Lake Ontario, with its hotels and iconic amusement park. St. Salome’s was originally started as a mission for summer residents. Durand United Church of Christ was subsequently established in 1918, as year ’round neighborhoods developed along the Culver Road corridor. By the 21st century, however, church attendance, nation-wide, experienced dramatic declines. St. Salome’s combined with another nearby congregation. Durand UCC made a similar decision, putting its property up “for sale.” Ultimately, St. Salome’s 1969 Mid-Century Modern church and Durand UCC’s 1930/1952 Gothic Revival church were purchased, demolished, and affordable apartments for senior citizens built on their sites.