I’m back from Nashville, where I spent most of last week at the National Trust’s annual conference. Despite the miserable weather, it was a great week of catching up with colleagues, meeting new people, seeing some of the sights of Nashville, and being inspired by what our counterparts around the nation are doing. I came back with lots of new ideas and look forward to putting some of my new knowledge to work! 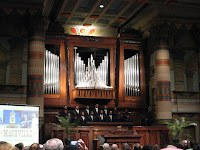 * Music everywhere! Nashville makes the most of its status as “Music City” – and when it comes to heritage tourism, music is a great theme that is relevant to their history, the present, and the future. The Trust integrated music into the conference, starting off the opening and closing plenary sessions as well as special lectures with musical performances. I especially loved hearing the Fisk Jubilee Singers before the closing plenary. (Left: The Fisk Jubilee Singers at the incredible, Egyptian Revival Downtown Presbyterian Church)

* Sustainability, likewise, was everywhere – the Trust is hard at work to ensure that preservation and sustainability become linked in everyone’s mind, not just the minds of us preservationists. I didn’t get to Nashville in time to hear about the “Nashville Challenge,” which involves aligning the preservation movement with nationwide sustainability efforts, but will be checking out follow-up materials about it. Educational sessions, field visits, and special lectures on the topic throughout the week ensured that we all got the message! 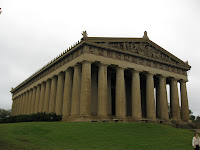 * The Parthenon – what can I say about this unusual local landmark. I visited as part of my overview bus tour of Nashville, which was tremendously interesting and quite educational. Our wonderful guide, a longtime Nashville preservationist, shared her insights about about various zoning techniques used to protect many neighborhoods, and it was interesting to see how these techniques are playing out. We visited Fisk University, saw “music row” (the center of the business side of the music business), circled the magnolia-lined perimeter of the not-bus-friendly Vanderbilt University campus, toured revitalizing neighborhoods, and stopped at the Parthenon for a tour and snacks. In case you aren’t familiar with this Nashville site, it is a full-scale replica of the Parthenon in Athens, constructed of plaster for Tennessee’s Centennial Exposition in 1897 and rebuilt in concrete in the 20th century when the building had proved too beloved to be taken down with the other temporary exhibit buildings. Inside is a 42-foot statue of Athena, intended to replicate the one in the original Parthenon. (Left: The Parthenon, of course!) 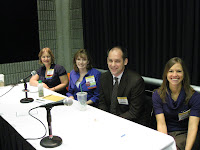 * My session on local advocacy, held at 8:30 Saturday morning (yikes) was gratifyingly well attended for such a crummy time slot, and I thought it went very well. Rhonda Sincavage of the National Trust’s policy department moderated; my fellow panelists were Mike Buhler of the Los Angeles Conservancy and Michelle Kimball of the Preservation Resource Center of New Orleans. Despite our cities’ very different sizes, geographical locations, and challenges, we found a lot of common themes in our approaches to advocacy. It was an interesting discussion to participate in, and I hope our audience enjoyed it and learned something! (Left: Michelle Kimball, me, Mike Buhler, and Rhonda Sincavage) 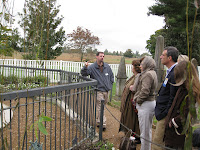 * The Hermitage was one of three sites I visited on a tour highlighting “Preservation Leadership Case Studies.” We saw three models: the Hermitage (Andrew Jackson’s beloved home) is run by a very longstanding nonprofit organization; we visited 20th century historic house that was recently acquired by a greenways commission and will be rehabbed for a park use; and also toured an 1850s mansion owned by the city that is in need of some TLC and a more viable use. (Left: Visiting the Rachel and Andrew Jackson gravesite at The Hermitage) 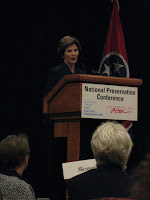 * Laura Bush was the speaker at the annual Advocacy Luncheon; she talked about the Preserve America and Save America’s Treasures programs, which she championed as First Lady. She told the assembled preservationists, “Whatever you’re doing, you’re making sure that future generations of Americans can enjoy the natural and historic treasures of our nation.” (Left: Laura Bush at the Advocacy Luncheon)

* The Preservation Action auction and party, held at B.B. King’s on Friday night, was fun, as always! I am a former PA intern and always happy to support this great cause. They are part of a coalition advocating for full funding of the Historic Preservation Fund, which supports critical preservation activities such as Section 106 review of federally funded projects, the National Register of Historic Places program, preservation grants, state preservation plans, and much more. Please read more about it and find out what you can do to help this important effort. 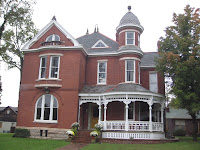 * The candlelight house tour featured East Nashville neighborhoods that reminded me of Corn Hill: wonderful 19th-century architecture; a legacy of terrible blight in the mid-20th century; renewal since the 1960s as houses have been rehabilitated. Unlike Corn Hill, they have also had to contend with an unusual string of disasters: a devastating fire in 1916 cut a wide swath through the neighborhood (its path visible today by the presence of bungalows rather than Queen Annes), followed by terrible tornadoes in 1933 and 1998 that similarly destroyed and damaged thousands of houses. (Left: One of the houses on the house tour) 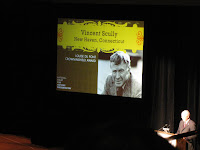 * At the annual Preservation Awards Ceremony on Thursday evening, my favorite college professor, the incomparable Vincent Scully, received the Louise Crowninshield Award, the National Trust’s highest award for lifetime achievement. As part of the ceremony, the speakers noted that many people were inspired to enter the preservation field by taking his classes, and I am one of those people. I took two of his classes, and could never get enough of his animated delivery, his incredible comparisons, and his awe-inspiring insights about architecture, nature, and humanity. It was a bittersweet moment, however, because Professor Scully was unable to attend due to ill health. (Left: The awards ceremony)

* Of course, it wasn’t all tours and parties – I spent most of my time in educational sessions, which were informative and stimulating, as always. My favorite was a session titled “Preserving Housing in Low-Income Neighborhoods,” where Brent Runyon, executive director of Thomasville Landmarks, and Amy Kissane, executive director of the Athens-Clarke Heritage Foundation, described programs in which v0lunteers rehabilitate houses in low-income historic neighborhoods. The programs are exciting, and the before and after photos are impressive! I also learned a lot in sessions on the recent past, the Trust’s “Green Lab,” providing effective field services, and more.

My trip was partially funded by a Partners National Preservation Conference Travel Grant, and I am so grateful for the National Trust for this assistance.

I brought back a huge pile of materials, notes, and brochures, and as I make my way through them, I hope to share more details on some of the most relevant information and ideas.