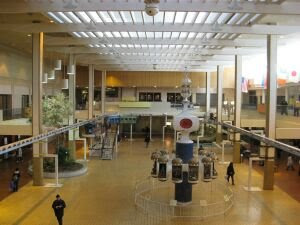 A team from the Landmark Society is reviewing the DGEIS and preparing our formal comments to be submitted in writing later this month. In the meantime, I would like to commend the City on leading a thoughtful process that has provided many opportunities for public input, and would also like to thank the City and its consultant team for many months of careful planning and serious thought about the best possible future for this challenging property.

Midtown Plaza, particularly the atrium, is a significant and unique historic resource that potentially presents a wealth of opportunities for reuse as part of a revitalized city core with a distinctive character. Our preference would be to see the atrium integrated into a creative reuse of this site.

At the same time, having participated in the planning process, we recognize the serious economic and physical obstacles that limit the viability of such a reuse. We recognize the constraints that saving the atrium would place on the rest of the site, particularly the circulation pattern. That said, we would support any ongoing efforts to find a suitable reuse that could still save the atrium.

Midtown was a pioneer in its day, an innovative concept that was heralded by the national media and by planning experts across the country. It remains the most fully realized and most intact example of the work of Victor Gruen, a nationally influential architect specializing in retail design and urban planning in the 1950s and 1960s.

If the ultimate decision is to demolish the atrium, we believe that loss can be mitigated only if it is replaced by an equally forward-thinking, high-quality design that functions as a true gathering place for the center city. It is too soon to tell if the open space now envisioned for the center of the Midtown block, the approximate site of the atrium, is an urban amenity of sufficient quality to mitigate the loss of the atrium, but we will strongly urge that this urban landscape not be an afterthought but a bold, innovative example of civic design.

Finally, and most importantly, we remain concerned – particularly in this extremely difficult economic climate – that we could see a situation where the demolition occurs but the funds for redevelopment dry up, leaving a vast empty space in a crucial part of downtown. We strongly urge the city to pursue phased demolition, only demolishing what is certain to be rebuilt, and to put in place any mechanisms that would prevent this devastating scenario.

We look forward to submitting our formal comments. Thank you for the opportunity to comment tonight.