Five to Revive – a list of five historic sites determined by The Landmark Society of Western New York to be in need of targeted revitalization was announced today at the Pulaski Library building on Hudson Ave in Rochester. The library is one of the properties on the list which includes:

“The heart of The Landmark Society’s preservation efforts is community revitalization,” said Wayne Goodman Executive Director. “Beginning this year we will annually publish Five to Revive, a list that will call attention to five properties in Western New York that are in need of investment. Whether buildings, landscapes, or structures, they are significant historic properties whose rehabilitations can become catalytic projects for the neighborhoods and communities that surround them. “

“We are fortunate that the Landmark Society has chosen the Pulaski Library, the Eastman Dental Dispensary, and the Genesee Valley Park pedestrian bridges to be included in its Five to Revive list,” said Rochester Mayor Thomas S. Richards. “We have such a rich history in our many historic buildings, structures, and places of cultural importance. I have made preserving that history a priority as evidenced in such recent restoration projects as the Academy Building, Bridge Square and the Carriage Factory. Having sites designated by the Landmark Society as priorities for preservation will help us in our efforts as we seek to restore our significant buildings into spaces that may once again be enjoyed for years to come by our residents and the visitors who come to Rochester because of our architectural gems.” 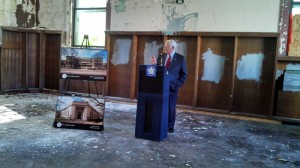 Mayor Richards speaking at the Five to Revive press conference.

The irreplaceable historic resources listed in Five to Revive will become priority projects for Landmark Society staff and programs. The Landmark Society will work collaboratively with owners, municipal officials, and developers to facilitate investment and foster rehabilitation so that these structures can again play an active role in their communities.

“Monroe County is grateful to the Landmark Society of Western New York for selecting the Olmsted-Brothers’ pedestrian bridges in our beautiful Genesee Valley Park to be included its upcoming Five to Revive campaign,” said Monroe County Executive Maggie Brooks. “Strong public-private partnerships with local organizations like the Landmark Society are invaluable when it comes to promoting investment in our community. I thank the Landmark Society for its contributions and I look forward to seeing its projects create jobs and protect our area’s unique history in the days to come.” 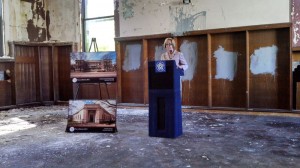 Launched as part of The Landmark Society’s 75th Anniversary, the Five to Revive initiative chaired by Tom Castelein, Vice-President of Preservation on The Landmark Society Board, will enhance the organization’s ongoing efforts to support revitalization in western New York. “I applaud the 75 years of the Landmark Society preserving not only structures, but much of our history that so beneficially assists us as we move forward as a community,” says Senator Joe Robach. 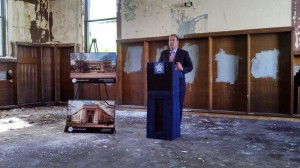 Senator Joe Robach at the Five to Revive press conference.

In concert with the announcement of Five to Revive the Landmark Society is also launching their 75th anniversary fund raising campaign which has a goal of $500,000.   “Initiatives such as Five to Revive require funding,” said Mary Z. Nicosia, Landmark Society Board Chair.”  We are confident that our goal will be met in time to keep our initiatives on track. As a matter of fact, we are proud to announce that due to the generosity of lead donors, several foundation grants and corporate contributions, we have already reached 75% of our goal. We ask for the community’s support to enable us to better serve these needs.”

>>Visit our Five to Revive page to learn more about the program and the five properties included on the list.