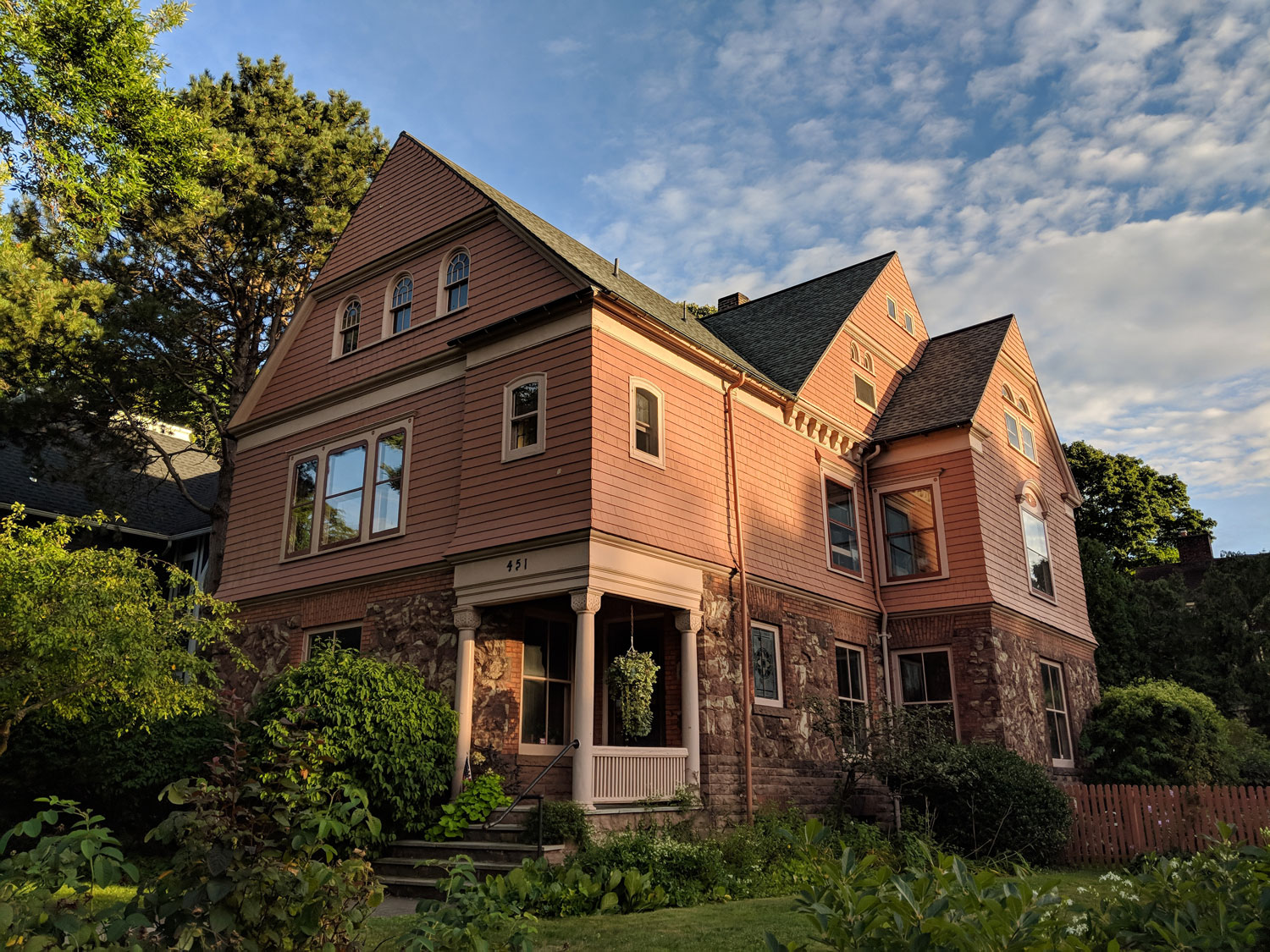 Perhaps you’re planning to buy a house in a City of Rochester Preservation District. Maybe you already own one, but don’t know precisely what that means. Someone told you that if you own a house in a Preservation District, you have to get permission to do anything, even to plant tulips in your front yard. If you’re confused, you’re not alone. This page, and our accompanying brochure, “Can I Paint My House Purple?” were designed to help you sort out a lot of information, get rid of misinformation, and tell you how to get more information if you need it. Click on any of the images below to download a copy of “Can I Paint My House Purple?” 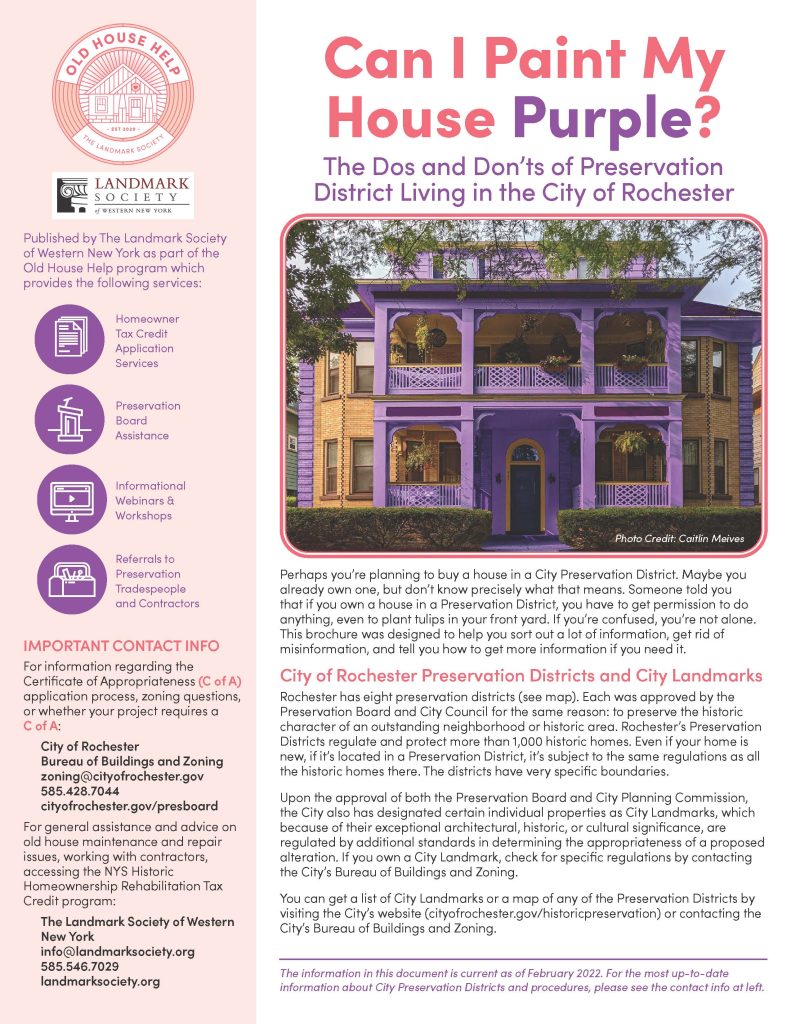 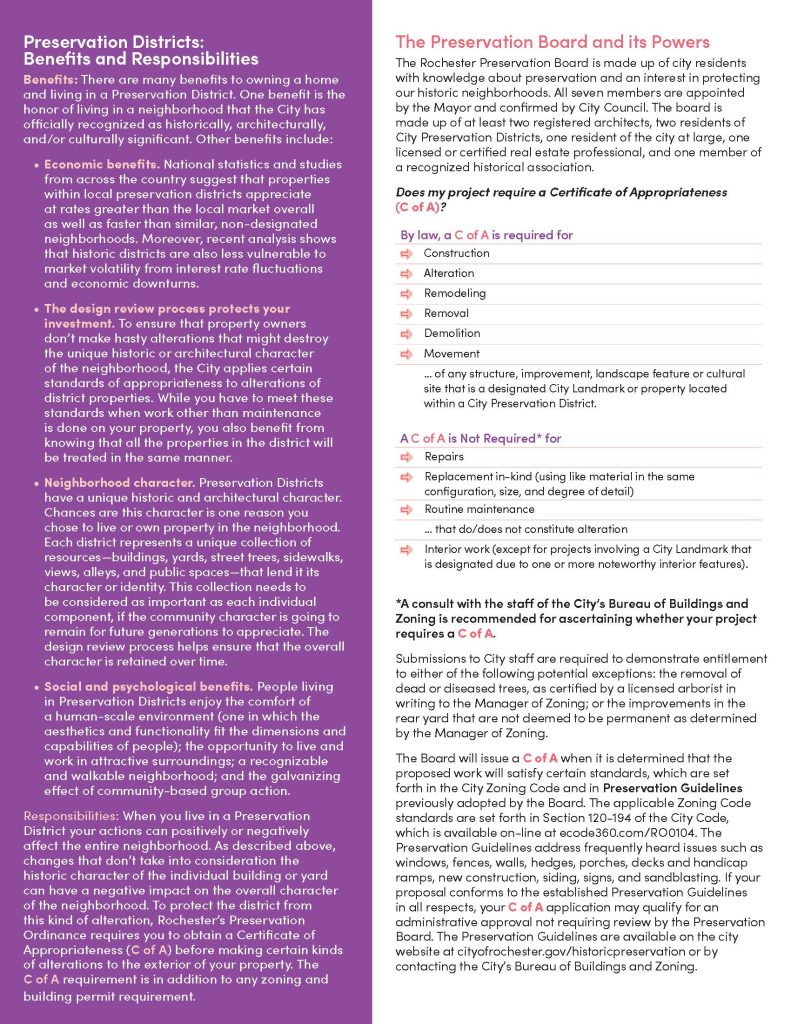 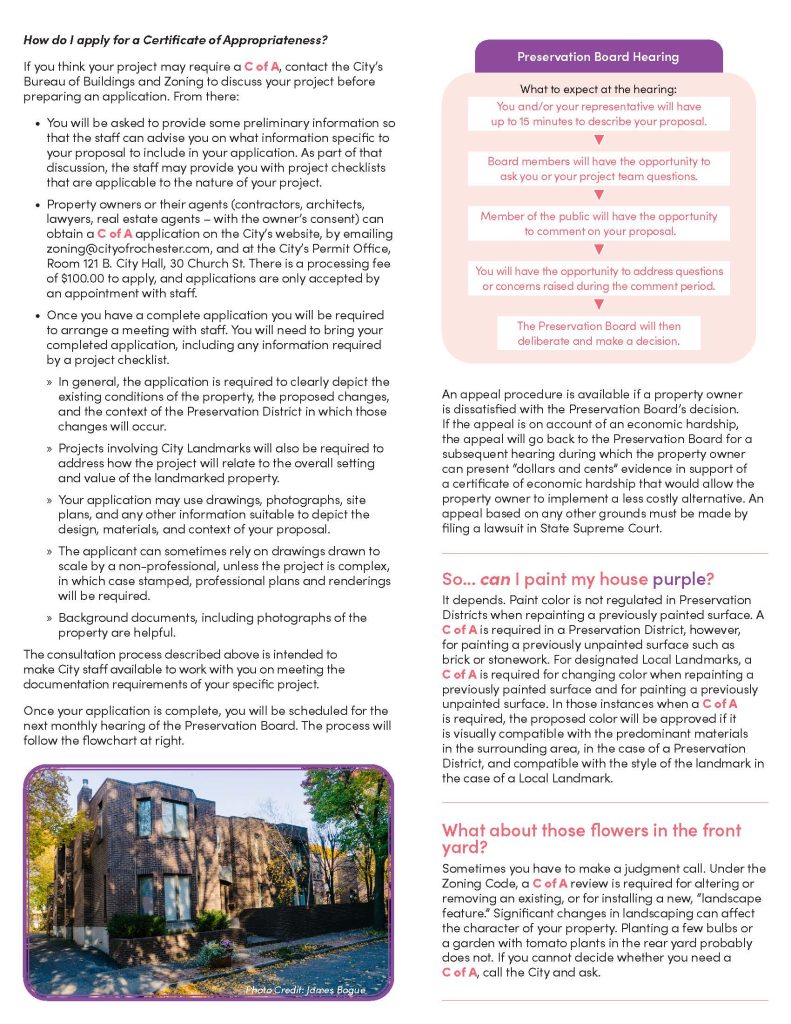 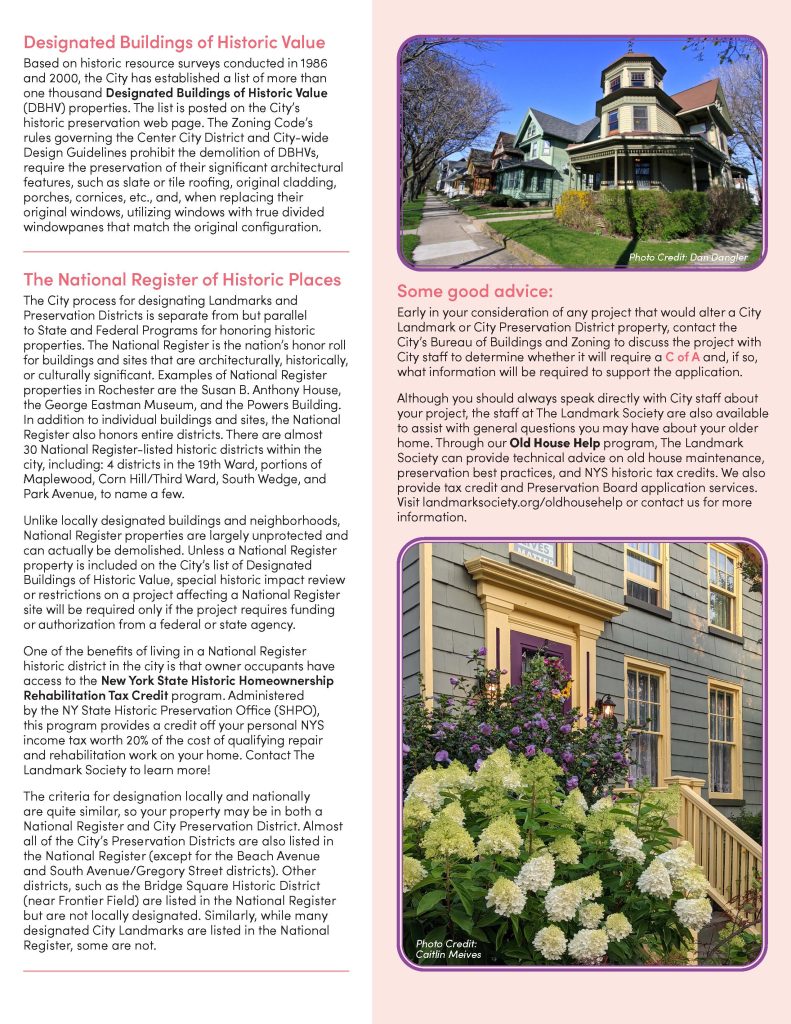 By no means is every significant area designated a district. Historic resource inventories completed in 1986 and updated in 2001 and again 2016-2021, identify many more areas with significant architectural heritage. And as time goes by, more areas reach a point of historic significance. Indeed, buildings constructed in our lifetimes may soon become landmarks.

Each district covers a very distinct portion of a neighborhood, not necessarily the whole area. You can view a map of all of the districts here, and read more about each district and view individual district maps here. For property lists, contact the City’s Bureau of Buildings and Zoning at zoning@cityofrochester.gov or call 585-428-7044.

For more information, be sure to download “Can I Paint My House Purple?”

Upon the approval of both the Preservation Board and City Planning Commission, the City also has designated certain individual properties as City Landmarks, which because of their exceptional architectural, historic, or cultural significance, are regulated by additional standards in determining the appropriateness of a proposed alteration.

Among these properties are City Hall, the Powers Building, Holy Redeemer Church, and the Ontario Beach carousel. Also on the list is a downtown street–Goldsmith Place–that dates from the early 1800s. As is true with the Preservation Districts, not every important property has been designated.

Properties listed as individual Landmarks lack the crucial protection offered by districts, in that nearby properties are not regulated for aesthetic compatibility.

With all of the districts and all but two individual properties, only the exteriors are regulated. Anything can be done to the interiors, as long as the changes do not impact the exterior. The two exceptions are the former Hallman’s Chevrolet Showroom (now Spot Coffee) and the Masonic Temple (the Auditorium). Because of the large expanses of glass at Hallman’s, the interior is so visible to the exterior that one cannot be considered separate from the other. The auditorium is important for its overall design and character. And, again, there are many more interior spaces worthy of landmark protection but, for now, we’ve only got two.

The City process for designating Landmarks and Preservation Districts is separate from but paralleled by State and Federal Programs for honoring historic properties. The National Register is the nation’s honor roll for buildings and sites that are architecturally, historically, or culturally significant. Examples of National Register properties in Rochester are the Susan B. Anthony House, the George Eastman Museum, and the Powers Building. In addition to individual buildings and sites, the National Register also honors entire districts. There are almost 30 National Register-listed historic districts within the city, including: 4 districts in the 19th Ward, portions of Maplewood, Corn Hill/Third Ward, South Wedge, and Park Avenue, to name a few.

One of the benefits of living in a National Register historic district in the city is that owner occupants have access to the New York State Historic Homeownership Rehabilitation Tax Credit program. Administered by the NY State Historic Preservation Office (SHPO), this program provides a credit off your personal NYS income tax worth 20% of the cost of qualifying repair and rehabilitation work on your home. Contact The Landmark Society to learn more!

Benefits and Responsibilities of Preservation Districts

Benefits: There are many benefits to owning a home and living in a Preservation District. One benefit is the honor of living in a neighborhood that the City has officially recognized as historically, architecturally, and/or culturally significant. Other benefits include:

Responsibilities: When you live in a Preservation District your actions can positively or negatively affect the entire neighborhood. As described above, changes that don’t take into consideration the historic character of the individual building or yard can have a negative impact on the overall character of the neighborhood. To protect the district from this kind of alteration, Rochester’s Preservation Ordinance requires you to obtain a Certificate of Appropriateness (C of A) before making certain kinds of alterations to the exterior of your property. The C of A requirement is in addition to any zoning and building permit requirement.

For more information about the benefits and responsibilities of living in a Preservation District, and about the Certificate of Appropriateness process, download “Can I Paint My House Purple?”

The Role of the City Preservation Board

The law that governs Preservation Districts and City Landmarks is Rochester’s Preservation Ordinance. Under the ordinance, a property owner is responsible for getting approval for any alterations to the exterior of their property. Approval is required for all non-maintenance exterior work, including demolition, any alteration, any removal of features, and major landscaping. Painting is regulated only on buildings that are individual landmarks, including those that are within preservation districts.

Approval is granted in the form of a Certificate of Appropriateness, once an application is made to the city’s Bureau of Buildings and Zoning. The name of the certificate is telling: the new work must be appropriate to the property and to nearby properties. That is, it must “fit” aesthetically with its surroundings. Because it is sometimes difficult to define “fit”, most applications are reviewed by the Rochester Preservation Board.

The Rochester Preservation Board is made up of city residents with knowledge about preservation and an interest in protecting our historic neighborhoods. All seven members are appointed by the Mayor and confirmed by City Council. The board is made up of at least two registered architects, two residents of City Preservation Districts, one resident of the city at large, one licensed or certified real estate professional, and one member of a recognized historical association.

For more information about the Preservation Board and the Certificate of Appropriateness process, download “Can I Paint My House Purple?”

The Role of the Landmark Society

Only a government can adopt a preservation ordinance, create preservation districts, and designate individual landmark properties.

Federal and state laws define how this can be done, with further definition by the courts. Preservation regulations are part of land use law and have been tested and refined through legal challenges.

The Landmark Society, despite many people’s beliefs, has no regulatory authority. Legally, we cannot designate a property as an “official” landmark or district. When we speak of landmark properties, we refer to all those with architectural significance, many of which are undesignated at any level.

Our role is to help identify those properties with landmark characteristics that would qualify for official designation. Often times, we help research a property and prepare nomination forms. We also help educate the general public as well as members of preservation boards and zoning staff.