2019 marks the 50th anniversary of the Stonewall Riots: the event identified for initiating the modern Gay Rights Movement in the United States. Even before the Stonewall Riots, Rochester’s diverse LGBTQ community was at the forefront by championing equality and freedom for all.

In the 2019 New York Statewide Preservation Conference panel session, “Rochester’s LGBTQ Landmarks: 50 Years After Stonewall,” speakers will share the course and strategies of local organizations and the City of Rochester in exposing, saving and celebrating its LGBTQ history and historic sites.

In addition to this session, registrants will receive copies of three LGBTQ Historic Walking Tours created by The Landmark Society of Western New York. On Thursday, April 25 at 3:30 PM, registrants can join the third Historic Walking Tour of Rochester’s LGBTQ sites which explores Midtown, Dick’s 43 and Washington Square Park. Afterwards, registrants are invited to attend the “Stonewall: 50 Years Out” exhibit, presented by the Rochester Public Library.

In an effort to document the history of Rochester’s LGBTQ community, Larry Francer, The Landmark Society of Western New York’s Associate Director of Preservation, has spearheaded the LGBTQ Landmark Initiative to record the City’s LGBTQ sites.

The organization is in the process of identifying sites that can be listed on the National Register of Historic Places. This listing can lead to federal and state historic rehabilitation grants and tax credits to improve and preserve buildings and places of importance. 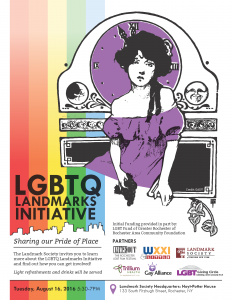 “Rochester has a rich history of acceptance of the LGBTQ community and resistance against prejudice toward the community,” Francer said. “We want to educate and create an atmosphere of pride through the sites where this all happened. We don’t want to lose this history much of which was in the shadows and in the closet for years.”

The exhibit will focus on the City’s role in the Gay Rights Movement, most notably in passage of the NY State Marriage Equality Act in 2011, which granted same-sex couples the right to marry in New York State.

Historian for the City of Rochester and Manager of the Local History & Genealogy Division of the Central Library of Rochester & Monroe County Christine Ridarsky is the coordinator and chief curator of the exhibit. Ridarsky is joined by community partners representing the diversity of Rochester’s LGBTQ community, including session speakers Evelyn Bailey from Out Alliance, Carol Ebersol-Weiss from Human Rights Campaign and Larry Francer from The Landmark Society of Western New York.

Evelyn Bailey is currently the Out Alliance Historian, and Archivist for LGBTQ community of Rochester. Evelyn is Chair of the Shoulders to Stand On Program, the historic documentation and preservation program of the Out Alliance. She is the recipient of the 2016 Debra E. Bernhardt Annual Archives Award for Excellence in Documenting New York’s History.

Carol Ebersol-Weiss is a member of the Human Rights Campaign, and is currently a member of HRC’s National Board of Governors, Greater NY Steering Committee, Western NY Coordinator. Carol has been involved in civil rights and social action work for 10 years, and currently is the organizer for the 2nd Thursday HRC Networking Event.

“This session is more than the sites on a walking tour or an exhibit about the history of Rochester’s LBGTQ community,” Francer said. “It is about the successes and the challenges of including all demographics – black, brown, white, young, old, gay, lesbian, trans, queer and straight allies – in a celebration of who we are.”

This Conference session will take place on Friday, April 26th from 3:15 PM to 4:30 PM at the newly rehabbed and preservation award-winning Sibley Square in Rochester, New York.

The LGBTQ Historic Walking Tour and Stonewall: 50 Years Out exhibit will take place on Thursday, April 25th. Participants are asked to meet in the business lobby of Sibley Square before the Tour begins at 3:30 PM.

To learn more about: