Reflections on a recent preservation debate 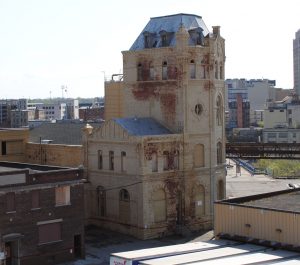 One definition of a “Cataract” is a waterfall, especially one over a precipice. Rochester’s historic High Falls district has a close relationship with a nearby cataract. It is, perhaps another, more common definition of “cataract” that more accurately describes the rhetoric surrounding the fate of a historic building located at 13 Cataract Street near High Falls– “ a clouding of the lens of the eye that obstructs vision.” Obstructed vision. This is precisely what happened over the past several months.

The Landmark Society was one part of a much broader coalition working to save this building. The Landmark Society’s efforts could be categorized as a hybrid vision, firmly supporting the Genesee Brewery’s efforts to open a museum and brew pub, but also looking for viable solutions that would preserve a historic building and save the brewery considerable money in the process. It was an effort that respected confidentiality and worked with brewery officials.

Some characterizations about The Landmark Society’s involvement and effort should be clarified:

“Preservationists demanded public funding to save the building.”
We focused solely on finding a private use with private developers using private funds. We only asked that the brewery consider assisting with the expenses associated with environmental abatement—a cost that had to be paid prior to demolition. This was a brewery expense—regardless of preservation or demolition. This would have helped make a private development more viable, but it would have also saved the brewery the expense of demolition—a substantial overall savings. However, when the brewery stated this was not in their interest and when the City of Rochester reported no available funding, we moved forward to find a solution that was completely funded with private dollars. Most of our efforts looked to private investment that did not include funding from Genesee Brewery.

“The Landmark Society had the authority to provide protection by providing ‘Landmark Status’.”
We have no legal authority to “landmark” any building. We did, however, support allowing the Rochester Preservation Board to provide input – a very logical approach for a designated building of historic value. The Preservation Board weighed all required criteria in a most responsible manner.

“Preservationists wanted to save 13 Cataract regardless of the cost or project feasibility.”
The Landmark Society’s testimony at public hearings clearly stated our very reasonable approach—an approach that never changed. We asked for time to find a viable, private reuse that saved the building, saved the brewery demolition money and created more investment. We readily admitted the project was challenging.

“Preservationists were trying to stop ‘progress’ and development.”
Simply not the case. Just the opposite. It has been clearly proven that adaptive use of vacant historic resources creates jobs, increases the local tax base and revitalizes neighborhoods. The reuse of historic buildings is progress defined. Many communities across the nation rely on this fact to greatly assist in economic development and increase the quality of life. Multiple examples abound in Rochester and Western New York. In reality, The Landmark Society called for a much larger development to complement the brewery’s plans. We worked directly with City officials, brewery officials and local professionals in
developing alternatives to demolition, oftentimes chasing a moving target. We were able to directly assist in assembling a development proposal that relied on partnerships. Several local, professional, proven, and skilled individuals worked with us to develop a solid and accurate proposal. This effort included a highly-experienced development company, a talented preservation architect, design leaders and a construction management professional. In the end, we were not able to present a fully-funded, immediate, guaranteed, private development that was agreeable to all stakeholders. Do we wish more stakeholders would have embraced our plan? Of course we do. However, we respect the decision of the Brewery to demolish the building. Even though we are disappointed to lose a historic resource, we appreciate and respect the process, which worked just as it is designed to work.

We do not vilify the Genesee Brewery. We value them as a significant part of our heritage and our community’s future. We appreciate their continued investment. While we may not completely agree with all aspects of their project, this in no way negates our respect for the company and its value. The brewery cooperated with us to allow access to the building whenever we asked. Ultimately, and quite bluntly, we were simply not able to present a plan that pleased everyone. The process decided the issue. If Genesee Brewery should require our assistance in a future preservation need, we stand ready to lend a hand.

I am honored to be part of an organization that is dedicated to take such great strides in working to make our corner of New York a more prosperous and liveable region by saving our unique heritage. It is a talented and professional organization. It is has a long, impressive and extensive track record. We are celebrating seventy-five years of saving our heritage and are engaged in numerous projects that are making immediate and positive impacts. While perpetual success is impossible, we will continue to demonstrate dedicated resolve, with the betterment of our entire region at heart. And when we do so, we have no reason to apologize, but every reason to be proud and increasingly supportive of such a worthy and important cause.

Reflections on a recent preservation debate

4 thoughts on “Reflections on a recent preservation debate”