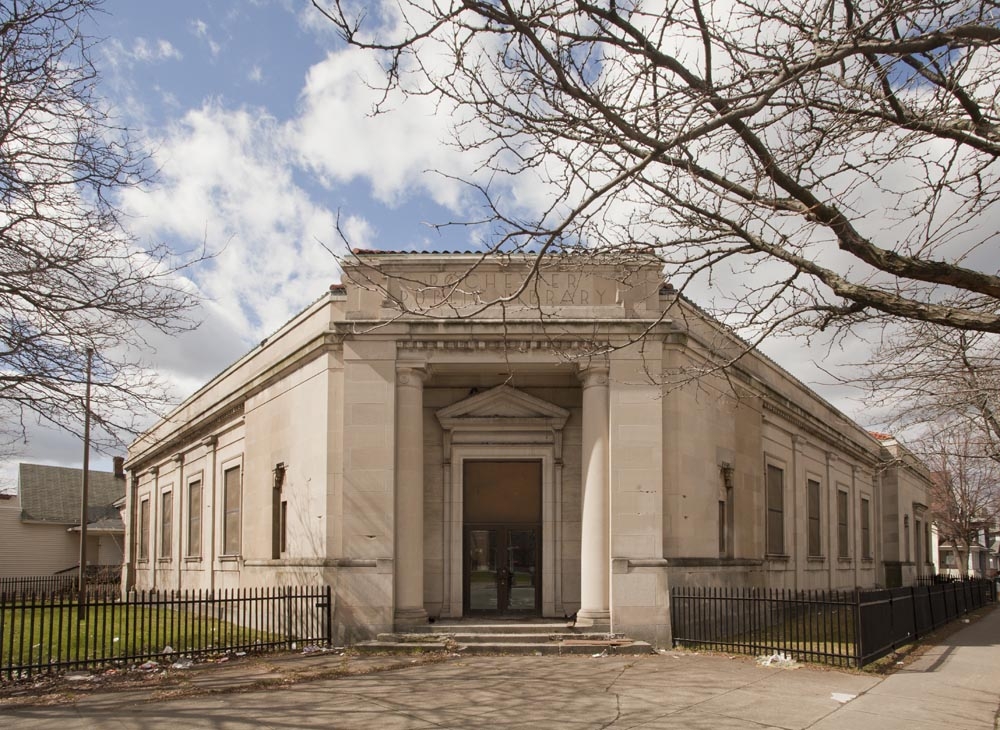 Built in 1931, the Pulaski Library (originally the Hudson Avenue Branch Library) was the second permanent library constructed by the City of Rochester.  Prior to its construction, the library system consisted of twelve temporary sites and the newly constructed permanent Monroe Avenue branch.  The central library (Rundel Memorial Building) did not yet exist.  The construction of a library on this site was further supported by completion of Benjamin Franklin High School directly across the street. A highly visible anchor in the 14621 neighborhood, the library is historically significant for its association with the growth and importance of the Polish community in Rochester’s North Side.  During construction, it was proposed that the library be named in honor of Revolutionary War hero Brigadier General Casmir Pulaski, a native of Poland, who died in that conflict.  On the 50th anniversary of this building, it was renamed “Pulaski Library” in honor of General Pulaski.

Listed in the State and National Registers of Historic Places, the Pulaski Library is architecturally significant as an intact representative example of Italian Renaissance style design applied to an important neighborhood civic building. It was designed by Rochester architects Herbert Bohacket and Lewis Brew, who were chose, in part, because of the success of their designs for the recently constructed Monroe Avenue branch library and East Side Presbyterian Church.  The Italian Renaissance design of the building reflects other important civic buildings erected during this era, including the Eastman Theatre/School of Music and the Monroe Avenue Branch Library.  The retrained, yet elegant appearance of the building is enhanced by its limestone construction and tile roof.   In 1994, this library was closed when two library branches in the northeast area of the city were consolidated as a cost-saving move.

A highly visible anchor in the 14621 neighborhood, the Pulaski Library is one of the most important civic buildings in the northeast quadrant of the city.  Its exceptional historic and architectural significance, combined with outstanding materials and design make it an important candidate for revitalization after 30 years of vacancy. 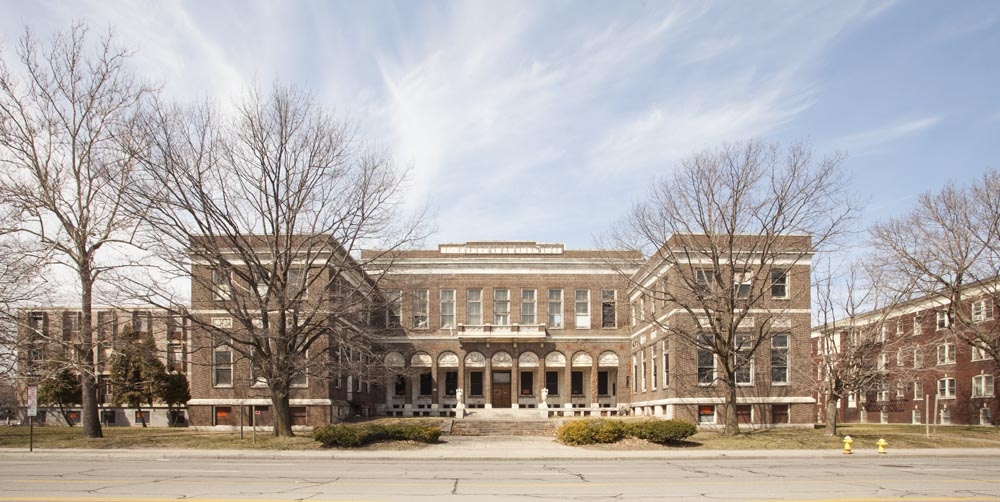 The Eastman Dental Dispensary, built in 1917 by George Eastman of the Eastman Kodak Company and Rochester’s leading philanthropist, contributed significantly to the improvement of dental hygiene in America and Europe, and was also the first school in the United States licensed to train dental hygienists, thus creating a new profession for women.  The dispensary promoted preventive and reparative treatments, educated dentists, and developed dental equipment and materials, all at a time when dental care was largely nonexistent throughout the world.  The design and programs of this Italian Renaissance style landmark inspired similar buildings in Stockholm, London, Rome, and Brussels (also built with donations from George Eastman).  Four of the five still function as originally intended.

Listed in the State and National Registers of Historic Places, and individually designated as a City of Rochester landmark, the Eastman Dental Dispensary is prominently located on a major gateway into downtown and features a distinctive design patterned on Italian Renaissance palazzos, with a symmetrical U-shape plan around a central court.  The three-story west wing was added in 1964. The exceptional building materials include brick, bronze detailing, art tile mosaics, and Venetian marble trim.  The dispensary was designed by  Gordon, Madden and Kaelber, Rochester’s largest architectural firm in the 1920s  and  responsible for many of the city’s leading buildings including the Eastman Theatre and School of Music, Rochester Gas and Electric headquarters, the Rundel Memorial Library, and the Reynolds Arcade.   The dental dispensary was vacated in 1978 when a new dental school was constructed at the University of Rochester medical campus and no tenants have been in the building since 1984.

A highly visible anchor on a major gateway into Rochester’s downtown and situated in a neighborhood  with several other major examples of civic architecture, the Eastman Dental Dispensary presents an important opportunity to rehabilitate an exceptionally significant property that is unique in the city. 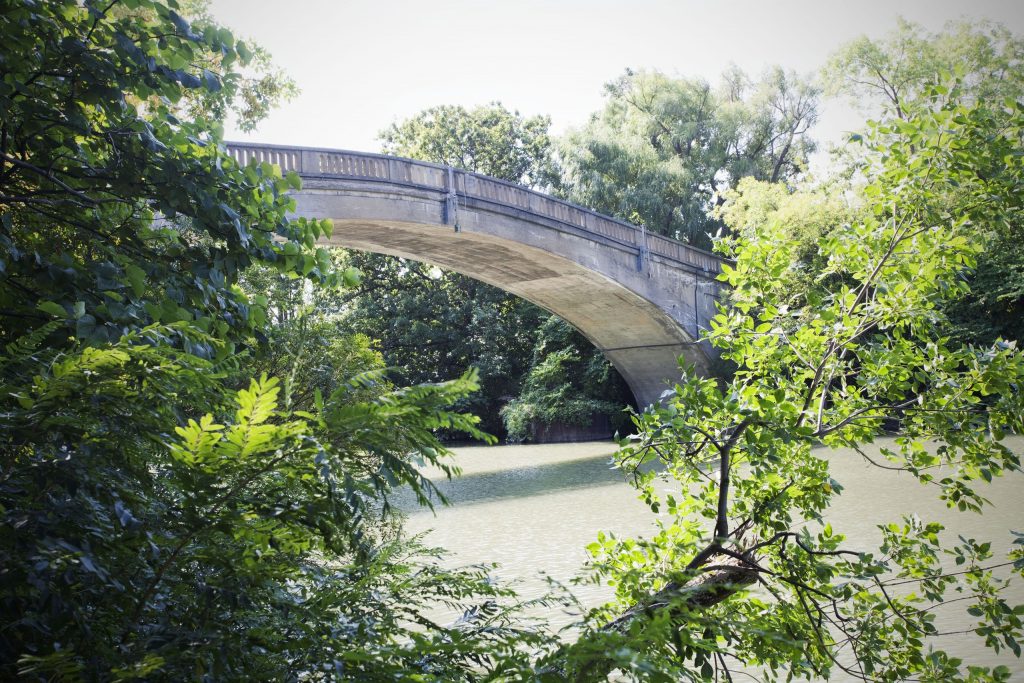 Rochester is just one of four cities nationwide that boasts an entire park system designed by Frederick Law Olmsted, revered as a visionary landscape architect and best known for his design of New York’s Central Park.  Olmsted designed Highland, Genesee Valley, and Seneca Parks for Rochester.   Olmsted and the firm that continued his work after his retirement also designed several parkways and small neighborhood parks.  In 1888, Rochester’s Board of Park Commissioners (now celebrating their 125th anniversary) selected Olmsted to design a network of parks and parkways for the city.  Olmsted encouraged the Commissioners to set aside generous amounts of open space as the city’s first major public parks and proposed a system focused on the city’s great natural asset – the dramatic Genesee River in all its glorious variety.  Olmsted’s three major parks in Rochester represented different landscape styles.  Genesee Valley Park was designed in Olmsted’s classic “pastoral” style, featuring gently rolling terrain in its 800 acres along the river south of downtown. Here, the winding park road creates a subtle sense of mystery and views of the river, the polo ground, and mature specimen trees that characterize the park.

When the Erie Canal was rerouted from downtown Rochester to cut through the park in the early 20th century, the Olmsted Brothers firm (Olmsted’s son, Frederick, Jr. and stepson, John) redesigned the paths and roads to minimize the disruption to the original circulation system.  As part of their design, three identical pedestrian bridges were constructed in 1916 and 1919 to reconnect the park paths severed by the canal. Their graceful design was inspired by the Central Park Bow Bridge, designed by Calvert Vaux, Olmsted’s partner in the design of Central Park.  These picturesque bridges are unique historic structures and are the only bridges located on the Erie Canal that are individually eligible for listing in the State and National Registers of Historic Places.

These Erie Canal pedestrian bridges, designed by the renowned Olmsted Brothers firm, are a unique community asset and a highly visible feature in one of our most important historic landscapes, Genesee Valley Park.  The park was originally conceived as a major component  of the Rochester park system, one of only four park systems in the country that was designed by Frederick Law Olmsted, one of America’s most prominent and visionary landscape architects. 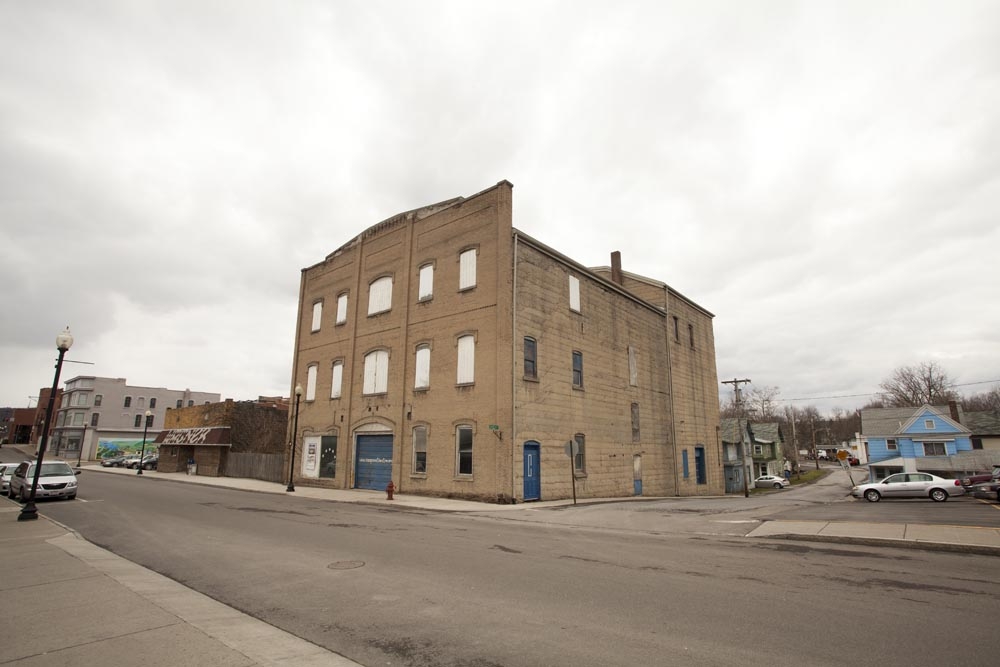 Listed in the State and National Registers of Historic Places, the Sampson Theatre, built in 1910, is architecturally and historically significant as a rare surviving example of a vaudeville house/movie theater in Penn Yan.  For its first 20 years, the Sampson was the center of entertainment and live stage productions in the Penn Yan community.  The building opened to the public on October 12, 1910, with a performance of Louis Mann’s comedy, “The Cheater.” Live stage productions of a broad range of theatrical and musical shows continued until 1927.  Between 1915 and 1928, the theater also served as a movie house, showing both silent films and, slightly later, “talkies.” The Sampson Theatre is also significant locally as an important example of the early use of poured concrete construction. The theatre represents an unusually early and ambitious use of concrete in a small town setting.  The choice appears likely to have been a response to the loss of an earlier building with an auditorium on this site by fire. The theatre was designed by local benefactor Dr. Frank Sampson, who arrived in Penn Yan in 1888 after graduation from the Hahnneman Medical College.  He was a prominent physician and surgeon in Penn Yan until his death in 1928.  In designing the theater, Dr. Sampson was assisted by consulting architect Frank Harrison.

With two balconies and twelve boxes, the theater could seat over 900.  The large stage and “fly space” reportedly could accommodate elaborate scenery from New York City playhouses that could not be accommodated in any Rochester or Elmira theater.  Although other theaters were subsequently built in Penn Yan, the Sampson was the first building specifically built as an entertainment center.  With eventual competition from other theaters in the community, the Sampson was converted into an indoor miniature golf course in 1929.    In 1936, a change in ownership resulted in a new use for the building: an automobile garage and showroom.  Between the 1970s and early 21st century, the building served as a warehouse for tires.  In 2004, the former theater was acquired by the Pennsylvania Yankee Theater Company, members of which are in the process of restoring the building to its original character and use as a center of the performing arts.

A highly visible anchor in Penn Yan’s village commercial district, the Sampson Theatre is one of the most important historic theaters in the Finger Lakes region. Its exceptional historic and architectural significance, combined with the on-going rehabilitation by the current owner, make it an important candidate for revitalization as a community performing arts center. 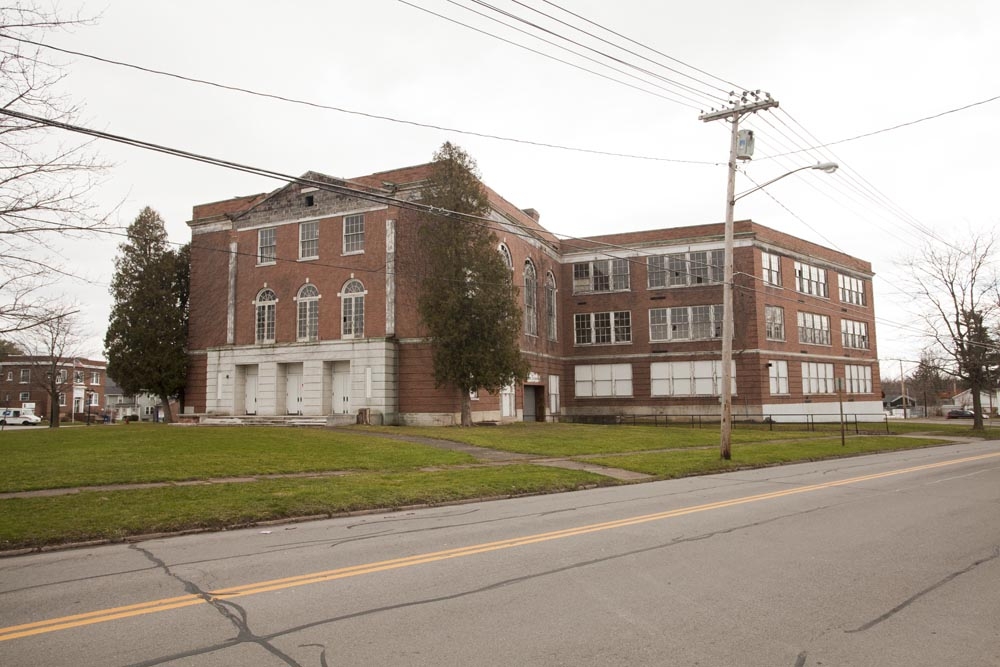 Built in 1931, the former Holley High School is a strategically located and well-recognized landmark, which occupies a prominent site in the village at the central intersection of Wright and Main streets (NYS Routes 31 & 237).  This Neo-Classical Revival building is located within the Holley Village Historic District, which has been declared officially eligible for listing in the State and National Registers of Historic Places.   This historic district, situated in the core of the village, is a significant collection of late-nineteenth and early twentieth-century commercial, religious, residential, and educational architecture.  Between 1825 and the early twentieth century, Holley was a small, yet bustling, canal-side transportation hub, as well as a center of commercial activity for the surrounding rural, agrarian region.  The very irregular street pattern is a reflection of the village’s earliest decades of prosperity, when its primary thoroughfare (Route 31) developed along the curving route of the west bank of the 1825 Erie Canal.  The canal was rerouted to the north during the 1850s-‘60s, although the southern loop through the center of the village was in local service well into the early twentieth century.

The highly visible site of this former school has been the location of two high school buildings, one constructed in 1896 and its successor, the present building, which was erected in 1930. Designed by Rochester architect and school specialist, Carl Ade, the former Holley High School was described as “the latest type of modern school construction” and featured fire-proof construction with structural steel frame, reinforced concrete floors, and brick exterior walls. Its restrained Neo-Classical design included a handsome columned portico on the façade.This prominent building served as the community’s high school into the mid-1970s. There has been only intermittent use of limited sections of the school in the intervening years. The former high school is a major visual anchor in the village business district. A contributing building in the proposed “Holley Village Historic District,” the former Holley High School also appears to be individually eligible for listing in the State and National Register of Historic Places.

A highly visible anchor in this historic Erie Canal village, the former Holley High School is one of the most important civic buildings in Orleans County. Its notable historic and architectural significance, combined with its prominent location and scale of design, make it an important candidate for rehabilitation and re-use after nearly 30 years of vacancy.