When I first moved to Rochester in 2012, I kept hearing about Mount Morris. Apparently, a developer who had revived Red Hook, Brooklyn had purchased many of the buildings, restored them, and brought this small village back to life. Well . . . with my background in revitalizing small villages and towns, I was skeptical! Absentee landlords are often a problem, and renovation of buildings without community partnerships can be a recipe for disaster. But at that time, I didn’t know Greg O’Connor, Louise Wadsworth, Pete Bishop, Bill D’Angelo, or Nicole Manapol.

Ten years ago, downtown Mount Morris had gone the way of so many of our small villages and towns with the rise of the internet and big box stores, with over fifty percent of the storefronts vacant and the buildings in disrepair. Worst of all was the perception that nothing could be done about it. And then Greg O’Connell appeared.

A 1964 SUNY Geneseo graduate, O’Connell had the vision and experience to turn Mount Morris around. Greg purchased 20 downtown buildings in 2008, renovated and rented them. When Greg buys a building and restores it, he doesn’t just rent it to the first person who shows interest: he targets a good mix of retail businesses, helps them out with an affordable rent, and requires them to have consistent hours of operation. He also wants them to keep lights on in the second floors to show that the downtown is still alive after the businesses close. Greg O’Connell is anything but an absentee landlord! He created a true partnership with not only the community but also the Livingston County Development Corp (LCDC). 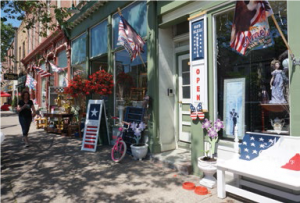 It takes engagement with different demographics – the newcomers as well as longtime residents – for a real community revival. Bill D’Angelo, President of the merchant organization Mount Morris Partners for Progress, is owner of the John W. Martin Funeral home. He reflected “The Funeral Home has 132 years of operation in Mount Morris, and is the oldest business in town. I am proud to be a part of Mount Morris history.” Louise Wadsworth, LCDC, Downtown Coordinator, has seen the change over time, as she explains “Since 2008 over 2 million dollars has been invested in 30 downtown buildings. The merchants work cooperatively to promote the downtown and each other. With new residents living downtown and significant visitor traffic, there is an excellent mix of retail businesses, including a cluster of wonderful antique stores and specialty restaurants.”
So what is it that keeps communities like Mount Morris chugging along? It takes hard work and partnerships. The Landmark Society started our Affiliate Program to create a network of likeminded, grassroots preservation groups that could learn from each other and know they were all part of a preservation movement larger than their own community. Mount Morris Historical Society joined the program this past year and Pete Bishop, a hometown boy who moved back to Mount Morris recently, shared the latest activity. “I just attended an event run by the LCDC called What’s Next For Mount Morris, Downtown 2.0. It was heavily attended by business owners, residents, and other local leaders. Key themes were ‘using our partner resources and creativity to continue to attract viable mom and pop retailers’ and ‘focusing on maintaining our small town charm but modernizing through digital media and using placemaking to give visitors as robust a visitor experience as possible’.”

Which brings me to the newest partnership for Mount Morris, Letchworth Gateway Villages (LGC) – a municipal collaboration established in 2017 for communities that provide services to the nearly one million Letchworth State Park visitors every year. This innovative partnership crosses over county lines to include Perry, in Wyoming County, along with Geneseo and Mount Morris. Nicole Manapol, the Director of LGC, writes, “The revitalization efforts initiated 10 years ago not only transformed Mount Morris’ main street, but served as a catalyst bringing together businesses, residents and municipal leaders. In many ways LGC is a direct outcome of those efforts and the conversations they inspired about ‘what’s next?’ It’s exciting to be working with municipal and community leaders on this next chapter – to be at a place where we’re transforming investments in those cultural and heritage assets into new economic possibilities.”

Transforming investments in heritage assets into new economic possibilities. That really sums it up. The Landmark Society is proud to be a part in the partnerships transforming this area of our region.