In August 2012, the first residential tenants began moving into the former Central Trust Building in downtown Rochester, the youngest building in our region ever rehabilitated using federal and state tax credits for historic rehabilitation.

The project began in 2010, when developers James Philippone and Ben Kendig, both of whom have long experience completing challenging local rehabilitation projects, teamed up with R.S. Lindsay Buildings & Interiors to tackle the renewal of the International-Style former bank and office building, built in 1959. They identified the possibility of using rehabilitation tax credits as part of their financing package. One problem: only National Register-listed buildings can take advantage of the credit, and this building had never been listed or officially determined eligible for listing.

Step one, therefore, was to establish that the building met National Register criteria – not always an easy case to make for a mid-twentieth century building. Fortunately, we were not starting entirely from scratch: a study of mid-twentieth century architecture in downtown Rochester commissioned by The Landmark Society in 2009 had already identified the building as a “genuine example of the International Style.”

The building, designed by Carl Traver for the Pike Company, was well documented at the time of its construction, when it was hailed as “another major contribution to the physical improvement of the downtown area” and won a local design contest based on its “attractiveness, simplicity of design and directness of expression.” In 1964, the fourth and fifth stories were added, completing the design as originally envisioned. An elevated addition for the Trust Department was added to the east in 1968, designed by Myron Starks, who had worked with Traver on the original design. 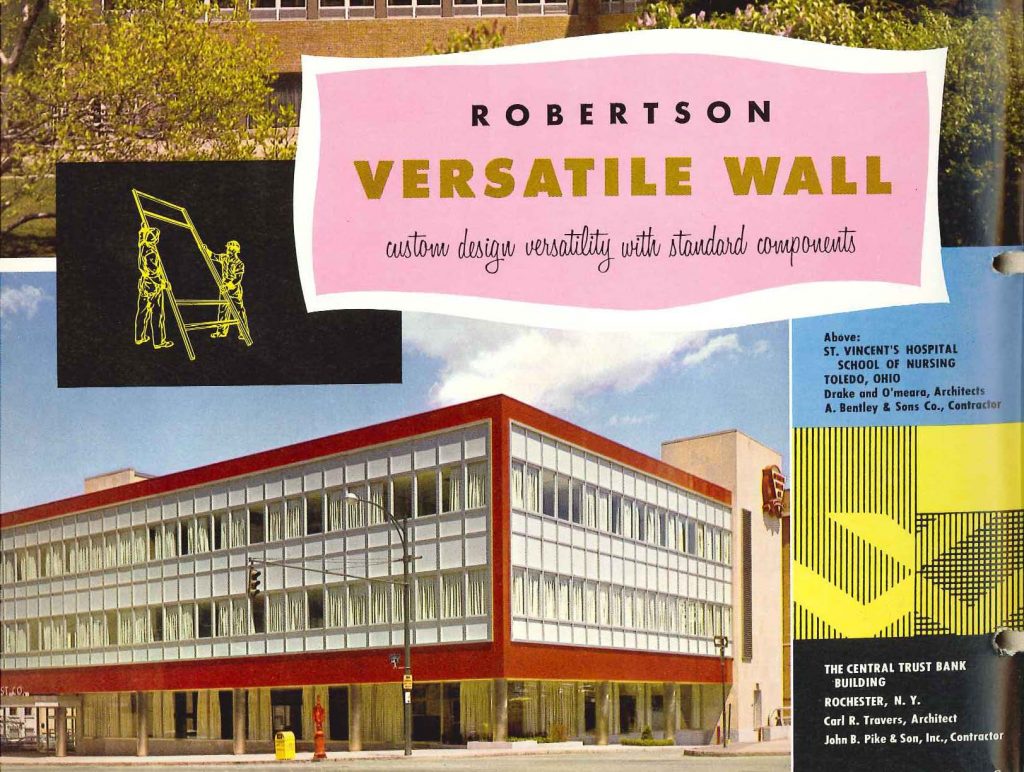 The building’s Bauhaus-inspired International Style features are best appreciated from the northwest, where the intersecting volumes housing varied functional components are most easily seen. Key to the building’s composition is the four-story curtain wall, consisting of a metal frame, porcelain-enamel panels, and glass windows, wrapping the west and south sides of the building. This curtain wall was constructed using the “Robertson Versatile Wall” (or “V-Wall”), a patented system touted as combining “the advantages of standard units with the artistic latitude of tailor-made walls” (and this building was featured in a national advertisement for the “V-Wall” system, see image above). Senior architect John Bero concluded that the Central Trust building represents “a main branch on the evolution tree of the modern curtain wall.” The importance of the curtain wall, the building’s significance as an early and strong example of corporate International Style modernism in Rochester, and the intactness of the design on the exterior all helped make the case that the building did meet National Register criteria; the building was officially listed in 2011.

While the curtain wall was key to the building’s National Register eligibility, it also presented the greatest challenges to rehabilitating the building in a historically appropriate manner. When it was built in 1959, energy costs were low and building owners relied entirely on mechanical heating and cooling systems. With its large expanses of single-paned glass and minimally operable center-pivot windows, the west- and east-facing curtain wall needed significant upgrades to meet today’s energy standards. This was not easy, as replacement hardware and weatherstripping were not available and the existing sash could not accommodate retrofit to insulated glass. After evaluating possible solutions, the design team proposed to replace the sash with custom-fabricated sash, retaining the original metal framing system. This approach, which received State Historic Preservation Office (SHPO) approval during design, substantially improved energy performance while fully preserving the original appearance of the curtain wall. 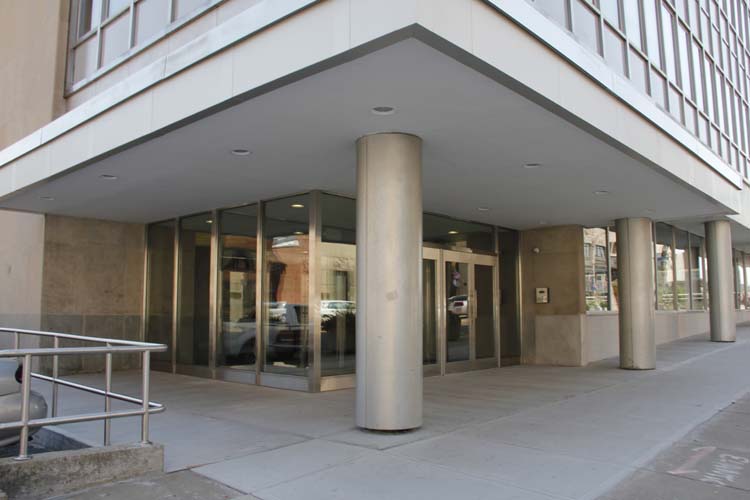 Another important goal was to restore the signature glass entry at the northwest corner, which had been altered with the addition of an enclosed room to accommodate an ATM booth. This striking original feature was carefully restored, bringing back the original drama of the glass enclosure and cantilevered overhang. 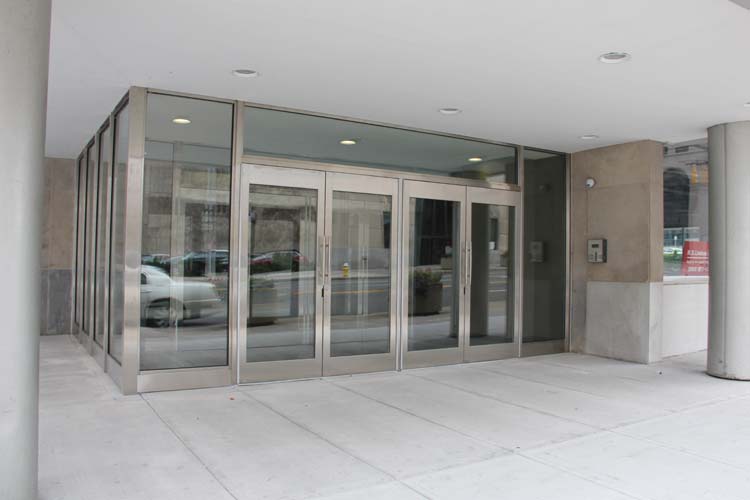 Every rehabilitation project has its share of surprises. Fortunately, the most memorable surprise in this project was a positive one: as 1980s finishes around the elevator walls were removed, Bero Architecture discovered that original multicolored glass wall tiles seen in historic photographs were still present beneath the drywall and paneling that had concealed them at least since the 1980s. The tiles were painstakingly restored in all elevator lobbies and are significant in bringing back some of the building’s original interior character, most of which was lost in 1980s remodeling. 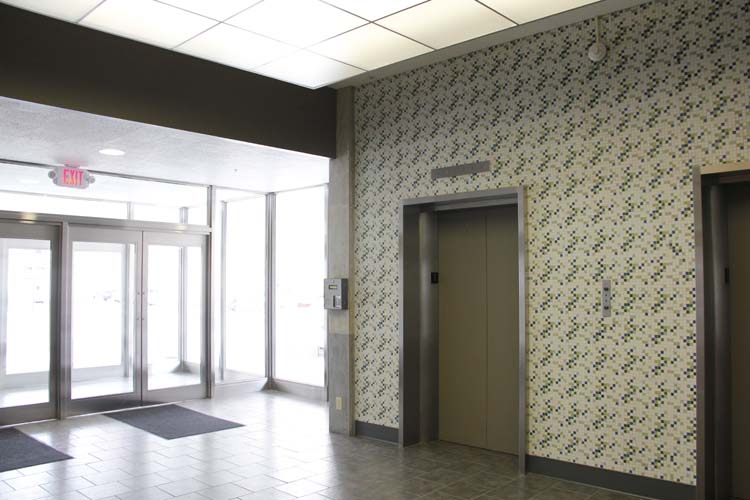 This project is an excellent example of how preservation can balance multiple interests and promote a variety of positive objectives: continuing to build a critical mass of downtown housing, returning an unused building to viable use, rehabilitating a piece of period architecture, and improving energy performance – all with a distinctive 1950s “Mad Men”-style flair. 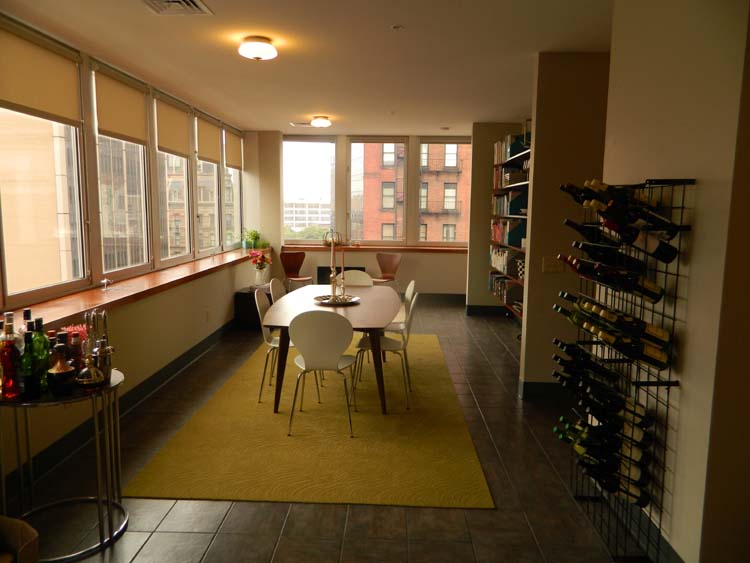