Masdar – A Masterpiece or Masquerade

Being a preservationist, your default mode is to find value in historic properties and sometimes, you tend to condone the newer developments. Even for our very own city, we have had polarized views about the Renaissance Square project, but I feel it’s always healthy to look around and learn from your contemporaries. Recently the Masdar City project has been hyped by the local and international media to the hilt. It is an interesting approach to urban planning and I think it will be very useful for our city to look at these new approaches and apply it to our in-house projects.

Masdar City, meaning “the source” is a one of its kind project undertaken by the Abu Dhabi government. Designed by the British architecture firm Norman Foster & partners, a $22 billion project, 6 square kilometer township Masdar city is undoubtedly the most ambitious project of the contemporary global world. Masdar city is futuristic in its design intent which will rely entirely on solar energy and other renewable energy resources with a sustainable, zero-carbon, car-free, zero-waste ecology.

In many ways, is a very ironic reaction to the present state of affairs in UAE. According to the WWF ecological footprint report Our Living Planet, which covers 150 countries around the world, the UAE has the largest footprint in the world, i.e. the UAE population places the most stress per capita on the planet. Compared to the world average Total Ecological Footprint (TEF) of 1.8 global ha/person, the TEF for the UAE is 11.9 global ha/person. It indeed comes as a surprise that one of the most oil rich states is setting up the world’s first carbon neutral and zero waste community. The design of the takes its cue from Arabic tradition of walled cities, where the stone-and-mud walls will be covered in photovoltaic panels capable of generating 130 megawatts. The placement and site planning of the buildings are such that on the northern edge, the walls are more permeable to let in breezes. Electricity will be generated from photovoltaic cells integrated into rooftops and a 20-megawatt wind farm. The water into the city will be fed from a solar-powered desalination plant.

The circulation layout of will allow the individuals to live and work without the need for a personal vehicle. It will have narrow, shaded streets, more suitable for walking. Masdar will set up an integrated transportation system that will utilize Personal Rapid Transit (PRT) and Material Rapid Transit (MRT) systems that, together with pedestrian and public transit methods, will safely move people, goods and emergency services in a multi-level, barrier free environment. At the same time, it will be the first city to operate without fossil fueled autos and trucks.

Many interesting questions are asked around the globe on the intent, success potential and long term sustainability of the project, some of which were addressed in a panel discussion conducted by TreeHugger – the leading media outlet for environmental issues. A summary and discussion is presented ne 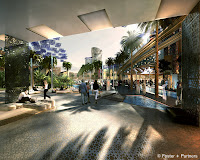 Is project a step towards genuine sustainable development in Gulf or a strategy to protect UAE from environmental criticism?

Skeptics: Although the design and planning principles all point towards sustainability but skeptics are concerned about infrastructural issues. They want to quantify concerns like “If all the oil is gone from the earth, will be able to support its population with all the renewable energy it will generate”? Does it have the infrastructural and construction support to continue with this project?

What is the success potential of in terms of justifying the principles of sustainability, which so far have been identified as mixed use, high density development and incorporating mass-transit?

Believers: By virtue of its design principles, confirms to even the very stringent requirements of sustainable development. is planned to open in 2009 with the collaboration of Massachussets Institute of Technology. The university is aimed at being a center for elemnetary as well as advanced learning in sustainable development, one that will directly impact the way the city evolves.

Skeptics: ’s design has an over-reliance on the expensive personal rapid transport, which is in its infancy and if this system fails, the entire design scheme is doomed. As urban planner Christopher Choa puts it “the development also depends on a highly engineered infrastructure network, which makes it very difficult to collaborate with sub-developers and deliver the scheme in a way that responds flexibly to phasing, market demand, and developer capabilities. No single entity in the UAE has the development capacity to deliver this project, so having an inflexible development approach either dooms the project, or risks degrading the ideal nature of the scheme in order to bring it to market.”[1]

What is the success rate of long term sustainability of the project as it is always more sustainable to re-build existing cities than to build cities from scratch?

Believers: Juxtaposing the old and the new is far more complicated than starting from scratch. The success of a relies on a multitude of factors such as geographical, economic, political, social, technological and environmental. Masdar surely has the ingredients to be very successful, considering that the planners of the city have paid attention to the local culture, context and the relationship of the old and the new.

Skeptics : Extensive studies in the past have shown that re-building existing cities is far more sustainable than creating new ones. The city to be moulded would provide infrastructural support, skilled manpower, and ready access to resources, which is undoubtedly garnered only over several years of development.

The opinions on and its potential impact are clearly polarised. On one hand the ambitiuos goals that the city sets itself raises many eyebrows. On the other hand, the enthusiasm brought forward by the promise of an environmentally aware and sustainable alternative in a fast resource depleting world is indeed infectious. Time will of course pass its verdict but till then remains a fascinating dilemma.

For more information on the project you can go to http://www.masdaruae.com/en/home/index.aspx

Masdar – A Masterpiece or Masquerade

1 thought on “Masdar – A Masterpiece or Masquerade”