Making the Case for Preservation in Tough Economic Times 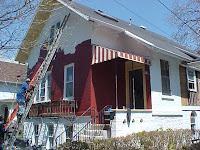 This is our 100th blog post on Confessions of a Preservationist! We all got a bit swamped in January catching up from the holidays and getting a few new staff members oriented, but now that February is here, we look forward to keeping up this blog more regularly.

Daniel Mackay, Director of Public Policy for the Preservation League of New York State, testified this week at a hearing of the New York State Senate Finance and Assembly Ways and Means Committees regarding economic development initiatives, making a strong case that an expanded tax credit for the rehabilitation of historic properties in distressed areas is a critical tool for stimulating the economy:

If New York is to be successful in preserving open space, working farmland and curbing sprawl, economic development must be directed back to existing municipal infrastructure, and that will require recognition and reuse of New York State’s extraordinary legacy of historic buildings in our commercial downtowns and residential neighborhoods across the Empire State.

Because New York State faces a severe budget challenge, now is the time to prioritize implementation of the tools and programs that target public and private reinvestment where it is most needed, in ways that most effectively leverage private and federal dollars for community renewal and economic reinvestment, and in ways that most aggressively and immediately meet economic stimulus benchmarks.

The program that meets these tests and serves these goals is an expanded New York State Rehabilitation Tax Credit. Legislation will shortly be introduced by Senator David Valesky and Assemblymember Sam Hoyt which will effectively and appropriately expand this program, direct stimulus and rehabilitation activity to distressed areas, and contain costs for New York State…

The Preservation League, and a diverse and growing partnership of business leaders, municipal officials, economic development interests, and a wide array of environmental and preservation organizations [including the Landmark Society] are joining together in a campaign entitled “Reinvest New York” to promote inclusion of this program in the enacted 2009-2010 New York State Budget…

– Excerpts from the testimony of Daniel Mackay, Director of Public Policy, Preservation League of New York State, at the Senate Finance and Assembly Ways and Means Committees’ Joint Legislative Hearing on the 2009-2010 Executive Budget Regarding Economic Development Initiatives, Wednesday, February 3, 2009.

Daniel shared figures demonstrating that in Maryland, Missouri and Rhode Island, three states with effective tax credit programs similar to the one we are hoping to enact in New York State, the economic benefits far outweigh the expenditures on the program. For example, in Rhode Island, every $1 million in state tax credit investment leverages $5.35 million in total economic output. In other words, the program more than pays for itself – it generates income for the state and creates jobs while improving our communities.

In the face of a very challenging budget climate, we’ll continue to work with the Preservation League to make the case that focusing our limited resources on the revitalization of our existing downtowns and historic neighborhoods is a wise investment with a tremendous payoff in the financial and environmental health of our state.

Making the Case for Preservation in Tough Economic Times