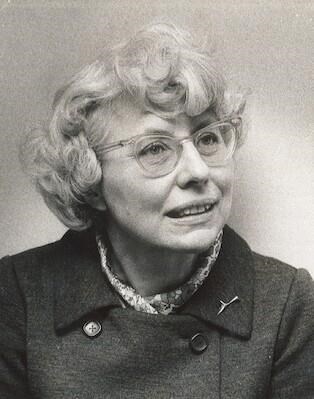 We were deeply saddened to learn last week of the passing of Jean France. Jean was a longtime Landmark Society Trustee, an accomplished architectural historian, and a passionate preservationist. In short, she was an icon in Rochester’s preservation and architecture community. Below is a remembrance by Landmark staff member, Cynthia Howk.

The foremost expert on Claude Bragdon, Rochester’s most innovative, early 20th- century architect, Jean researched Bragdon’s career and life, beginning in the 1950s – a project for which she collected a remarkable archive of materials, during her more than 60 years of researching Bragdon.

In addition to Bragdon, Jean also lectured widely on local architecture, historic preservation and designer/artist Harvey Ellis. Jean was guest curator for a 1970s exhibit on the work of Ellis at the Memorial Art Gallery – for which she also wrote the catalogue. She also organized the Memorial Art Gallery’s “Architecture The Art We Live In,” series that drew noted speakers from throughout the field and extended over a decade, due to its overwhelming popularity.

Jean’s career as an architectural historian was framed by her direct involvement with two unique projects that involved Rochester buildings designed by two giants of the architecture world: (1) her participation in selecting Louis Kahn for the design of the First Unitarian Church, in the late 1950s and (2) her participation as the architectural historian on the team that coordinated the rehabilitation of Frank Lloyd Wright’s Boynton House in 2010.

Jean served as a community advocate and preservation consultant to many local preservation boards and municipalities. Her expertise was frequently sought by owners and architects who were working on the rehabilitation of a significant building, including houses, court houses, and other public buildings.

Jean served for 52 years as a trustee of The Landmark Society of Western New York, of which I’ve been a staff member (and colleague of Jean’s) for over four decades.

Despite her failing health in recent years, Jean always rallied if the discussion featured architecture, preservation or architectural history. With a twinkle in her eye and her inimitable way of “telling it like it is,” she was a remarkable colleague – that will be sorely missed, in so many ways.

Click here for Jean France’s obituary in the Democrat and Chronicle.