If you walk the Walk, Talk the Talk, you can be anything!!!

Even the President of the United States…… 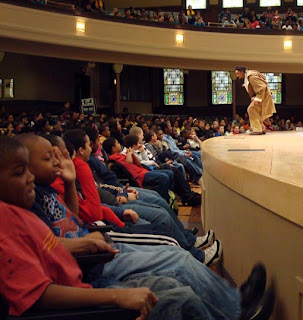 Have you ever imagined if your ancestors came down back to life and told you about the struggles they went through to create a world that you enjoy today? How wonderful would that be? You can re-live the world that they lived and learn from their lives, experiences and will not repeat the mistakes they did…

Well over 1,000 school children had that chance today right here in your city at the Hochstein School of Music. What could be a better place to experience this magical moment of your history in such a pristine location? With its hardwood floors, plastered filigree detailed ceiling, curved balconies, stained glass windows and wood panels behind the stage— a perfect backdrop for such a performance. Yesterday and today, was the 14th annual presentation of Landmark Society’s premier program Walk the Walk, celebrating the Black history month. The program was an interactive illustration of significant snippets picked from Rochester’s history as told in a live theatre setting. Six eminent Black men and women from Rochester’s history came to life and spoke to the elementary and middle school kids and gave them lessons learnt from their lives.

The theatre was bustling with students all over and you could hear their chatter. From the back came a man in his frontier clothing with a stick made to resemble the antlers. He mentioned how different this place was now from the time he was here with wilderness and rattlesnakes everywhere. This was Captain Sunfish, our ancestor who introduces us to all the other ancestors.

Our first ancestor was Austin Steward, a very gritty slave brought into New York, who always had the dream of starting his own business. He talked to kids about bullying and how to never give up your dreams, even if there are hurdles on the way.

Following him, came our famed Frederick Douglass one of the most celebrated citizens of Rochester. He told kids the story of his life and how he traced his path from slavery to freedom. The most interesting part of his story was that he asked kids philosophical questions and helped them think for themselves. The first question was, do any of you want to be a slave? We get an automatic loud response NO. Then comes the tricky question, do any of you want to be a master? We get an instinctive response of YES, followed by an emphatic NO. To me, the most interesting aspect of this performance was the interactive element, where kids were questioned to think for themselves. I must applaud Mr. Douglass for resolving kid’s dilemma about being a master. He said that you can be a master of words. It is wisely said, a pen is mightier than a sword. So if you master your words, you can be an orator like me.

Mr. Douglass was followed by his wife Anna Murray Douglass, a deeply touching act, where she talked about the struggles of her day to day life. Although she was the wife of a world famous man, but at home she had to fight for equal treatment from people at home. After her came Mary Jackson, an orphan whose mom died of influenza and she was moved into an orphanage. She talked about her struggles being a colored orphan and how she was ill treated by other people in the community. She emphasized the importance of praying and working hard in life. She reminded the kids of the feeling of not belonging to a place. She said, “If you ever felt like this even once, promise to yourself, you will never make anyone else feel like this”.

With her emotional lesson, came our last ancestor for the day George Brown—a soldier, the last surviving Civil War veteran member of his church over on Favor Street. Mr. Brown used to be an enslaved person and was sold for $ 1450 in 1862. Mr. Brown told his fascinating stories of escape, struggle and hope. He emphasized the significance of hope to the kids and mentioned that hope can bring the change.

It was a wonderful presentation and a must-see for everybody in the community. This presentation did not only give you a peek in the African- American history of Rochester but taught you lessons from the past and emphasized not to repeat the same mistakes in the present. It was a wonderful learning tool for the kids to acquaint themselves to their past and if they believe and work hard, they can be anything, even the president of the United States.

For me, it was a great learning experience, especially because I am an immigrant. My only disappointment was that I did not see any kids from various suburban districts. There were kids primarily from the City School district. It is my kind request to all the schools to make this program a part of their curriculum. It is a unique way to engage the students in an intelligent interaction with their history which they will never experience elsewhere.

It’s not too late for you to have this experience also! We also have a public performance free of charge on February 12, 7 p.m. at Mount Olivet Baptist Church, 141 Adams Street, Rochester followed by coffee and snacks. So don’t miss it!!

If you walk the Walk, Talk the Talk, you can be anything!!!