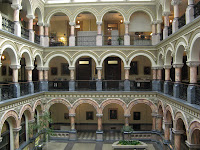 Today I was one of the speakers at the City of Rochester’s official 175th anniversary celebration in City Hall. We were asked to comment on the saving of City Hall from near-demolition, and the lessons this preservation victory can impart to us now and in the future. Laura Zavala did most of the writing of these comments – I made a few changes and delivered these remarks just before the cutting of the spectacular, 750-pound birthday cake!

Grassroots organizing, and garnering public support for projects, concepts, and societal changes that move our community forward, are all part of our city’s vibrant history. Frederick Douglass and Susan B. Anthony are two of the bright lights in Rochester’s long history of activism designed to bring about positive social change.

While many may not think of preservation as a form of activism, in reality preservation is exactly that. It’s common to think of preservation activities as dots on a timeline, defined by the moment in history when a landmark is “saved,” yet preservation is a much more fluid process. It’s relationship building, it’s research, it’s sometimes even marching to raise public awareness. Most of all, it’s the act of providing our communities with the most effective tools to work together for a sustainable future.

Rehabilitated buildings – such as this magnificent one in which we gather this morning – stand as testaments to the hard work of dedicated men and women with a vision of what our city can and will become with careful planning and altruistic vision and leadership. This building – our City Hall – is one primary example of visionary adaptation that adds so much to our city’s character and identity.

But it is more than that.

In 1968, plans were announced to construct a new federal building in Rochester, thus leaving this building vacant. Amid fears that abandonment would lead to swift demolition, a campaign was launched by The Landmark Society to encourage “recycling” the building by finding another use for it. The “Friends of the Federal Building” began an intensive publicity campaign with feature stories in local newspapers, radio and TV spots, and public speaking engagements. The Landmark Society gained National Register listing for the building in 1971 and city landmark designation in 1973.

The Friends’ quest was not guided only by the desire to share this architecturally significant structure with future generations, but also by why preservation makes good sense: it is the greenest of all construction options, it would save the city millions of dollars, it would serve to help with downtown revitalization, and it would save a rich landmark whose distinctive character could not possibly be duplicated with new construction.

The Landmark Society began exploring uses for the building, among them even a proposed Rochester Law School. At the same time, the City of Rochester began exploring the need for a new city hall. City Council commissioned the firm Handler-Grosso, Architects and Engineers to conduct a feasibility study, which revealed that rehabilitation and a new addition would prove much more cost-effective than demolition and new construction.

Just think: the environmental impact of demolishing this building and throwing away all its embodied energy – the energy that went into obtaining, preparing, and assembling its materials – would be equivalent to driving the average car around the equator almost 1,400 times. So the desire to save this building wasn’t just about sentiment or aesthetics – although surely this is a building worthy of both sentimental attachment and tremendous aesthetic appreciation; it was also about preventing the needless squandering of a huge amount of energy.

Through careful planning, analysis and advocacy, The Landmark Society successfully constructed a compelling and smart case to save the building, and worked diligently to gather public support.

Their path was not an easy one.

Editorials in the Times-Union and the Democrat and Chronicle seemed to waver between supporting reuse and calling for demolition. While some celebrated the stately Richardsonian Romanesque building, others deemed it “ugly,” “not worthy of saving,” and “having served its purpose.” Further causing delays was an issue that may sound familiar today – economic recession.

However, a new law signed by President Nixon offered the city the opportunity to acquire the building for the whopping sum of one dollar. A feasibility plan also showed that the building would meet new energy conservation guidelines.

In 1976, the City of Rochester acquired the building for its new city hall.
Frank Grosso, from Handler-Grosso, was the lead architect on the project and his partner Richard Handler was the chief engineer. The total cost of the rehabilitation was $5,300,000, or $37.85 per square foot, which was approximately 50% of the cost of a new building.

Today we see many old buildings recycled into new uses: Rochesterians eat barbeque or garbage plates in old railroad terminals, drink coffee in a former automobile showroom, and live in former medical offices and factories. Historic neighborhoods like the Susan B. Anthony district, Maplewood, and Park Avenue remain livable, vibrant communities. Each of these projects showcases the best of the past, bringing historic buildings back to life through creative reuse or ongoing stewardship.

Today, as we celebrate this significant birthday, we’re looking to the future, focusing on effective tools to retain existing buildings, landscapes, and neighborhoods, which are among our greatest renewable resources. To that end, historic preservation planning is not just a moment in time, a “saving” of a historic building. It’s a completely “green” activity essential to a more environmentally sustainable future. Americans already embrace as common sense the need to recycle aluminum cans, glass and newspapers. We advocate applying that same common sense to our built environment:* reuse existing buildings such as this City Hall, reinvest in our older and historic communities, and retrofit our existing building stock.

So the story of City Hall is written, frozen in perpetuity on Rochester’s historical timeline from the first meeting of the Friends of the Federal Building to the ribbon cutting ceremony for the new City Hall on May 5, 1978. However, this story also serves as a testament to the incorporation of sound and inclusive preservation planning processes in city planning efforts. With a better appreciation of the value of our historic resources in our development efforts, we can continue to inspire and make a difference through the same spirit of forward-thinking activism that truly flavors Rochester.

*With thanks to the National Trust for Historic Preservation for a great line!