If you ever wondered what’s behind those nicely carved wooden windows or shimmery curtains, you got your answer on this year’s Landmark Society’s 39th annual house and garden tour. You got this one of its kind opportunity to go inside 11 most unique houses in City’s oldest preservation districts in East Avenue- now listed on the National Register of Historic Places.

Being a preservationist, this tour was the greatest delight. You actually got the opportunity to go inside those magnificent mansions and see how the interiors reflect the exteriors. It was fascinating for me to see how even the same styled houses were so vastly different in their interiors. Besides that, each house had a great story to tell whether it was the million dollar kitchen at 60 Brunswick Street or the teak room at 1050 East Avenue which was especially imported from India.

Although each house was very special, but my top 5 are as follows:

The house is an example of Jacobean architecture, designed by Rochester’s legendary architect, Claude Bragdon. The detailing of the house is exemplary with its oculus leaded glass windows, brick patterns, bronze entrance canopy, curved gables and metal entrance door. Currently this single residence house has four condominiums and a fifth in the carriage barn. The interior of the condominium is a brilliant mix of historic and contemporary design with a beautifully remodeled kitchen, enclosed porch with huge panes of glass, and built- in bookcases.

The most fascinating aspect of this house was its adaptive reuse into a plastic surgery office. The present owners have done very sensitive restoration work, and have tried to be respectful of the history of the house; a wooden partition is added to the entrance foyer which resembles the original design. The interiors of the building have an abundance of carved wood and stained glass motifs reflective of Scotland- the original owner’s native land. 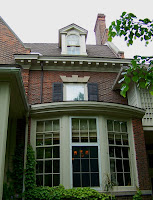 The most exciting aspect of this house was its history and evolution. The house was designed for George Eastman’s attorney by architect J. Foster Warner who also designed George Eastman’s mansion and in the same Georgian style and same railing design as that of George Eastman’s staircase. Currently the house is owned by one owner, but has been converted into two apartments on first floor with several studios on second and third floor. The attraction of the house is the extraordinary garden beautifully nurtured by the owner’s wife with features of a Zen garden. 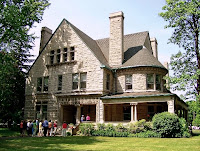 I had special attachment to this house as it had one room with teak woodwork hand carved in India. Being an Indian, it brought back memories of all the beautiful forts and temples I visited which had similar carvings but in marble. Besides the special attachment, this house was one of the finest examples of Richardsonian Romenesque style architecture in the City with eclectic interiors reflective of J. Foster Warner’s expensive and elegant tastes. 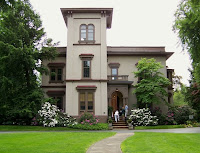 When I visit historic houses, I have a prejudice against period furniture. I like to see contemporary design in old buildings. The juxtaposition of old and new, which depicts the passage of time has always fascinated me. Someone correctly said, “Change is the only constant in life”, and this house truly embodies this philosophy. That’s the reason for this being my number 1 choice. The house is a perfect example of Italianate architecture with a projected central three story tower. The mansion has been converted to four condominiums with a fifth unit in the carriage barn. On the tour was Charles Arena’s condominium (the owner of famous Arena’s florist). The house was reflective of the owner’s eclectic taste, with its varied art pieces and exceptionally modern furniture and beautiful floral arrangements (obviously). The most captivating feature to me was the beautiful use of space with contemporary artwork and furniture, which made you appreciate the details even more due to the lack of clutter.

Besides the magnificent architecture, it was gratifying to see thousands of people walking down the East Avenue over the weekend and appreciating Landmark’s role in the Society and commitment to preserving good architecture. I would like to thank all the people who took the tour and became a part of our mission.