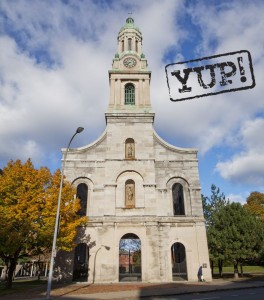 The Landmark Society’s Young Urban Preservationists (YUPs) present Open the Gates @ St. Joseph’s Park on Friday, August 1st. St. Joseph’s Park, the remains of a church that burned in 1975 and was converted to an urban park, will officially re-open its gates to the public on First Friday. The YUP-sponsored event will include: music, munchies, lawn games, and St. Joe’s Mo’s (mojitos). Photography by Richard Margolis will also be on display. The event is free and open to the public!

660 W. Main St. was selected as one of the 2014 Five to Revive because of its visual and historic significance to the West Main corridor and because of an imminent threat of demolition.  The announcement of 660 W Main was made prior to the official 2014 Five to Revive press conference because of this imminent threat. Built in 1870, 660 West Main Street is the oldest surviving church building on Main Street and has served as an important community anchor for over 140 years. A City of Rochester Designated Building of Historic Value and eligible for listing in the National Register of Historic Places, this highly visible building is historically significant for its association with the growth and importance of the German community in Rochester and has excellent potential for redevelopment as part of the on-going improvements in the West Main corridor, a major gateway into downtown.

The Landmark Society believes that a redevelopment project that incorporates reuse of 660 West Main, would be much stronger and would be of greater benefit to the neighborhood and the city. With the millions of dollars that have been invested in rehabilitation of historic buildings and sensitive infill just a block to the west and east of this property, 660 West Main could be a prime candidate for a well-planned rehab and infill development project. Visit our website for more information on the Five to Revive program. 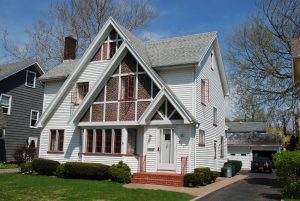 Long time Landmark Society volunteer, former intern and now staff at Bero Architecture PLLC, Christopher Brandt, recently purchased his first home. He started a blog, affectionately called My Perfect Little Money Pit, to chronicle his rehabilitation projects. Check out his guest post about the blog on our website and get links to other old house blogs. While you’re there, let us know if we’ve missed any of your favorite old house blogs!