Beneath these streets lies potential 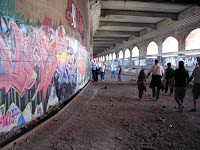 A few weeks ago, some friends and I took a tour of Rochester’s abandoned subway. (you can read about another staffer’s adventure in a related post here). The standard group tour only went to the Broad Street Aqueduct, and from there our guide set us loose to explore. Most people left out the way we entered, but a small group of us, flashlights in hand, continued on into the darkness, not knowing what we’d find. It was simultaneously thrilling, creepy and amazing. We had spontaneous humming of the Indiana Jones theme song, our nostrils were assaulted by some smells of which I’d rather not know the source, and there were times I truly thought I would become fodder for the next Saw sequel, but overall it was incredibly inspiring. Our ragtag little group of strangers bonded as archaeologists of a lost urban landscape – a threatened landscape that stands to be erased. 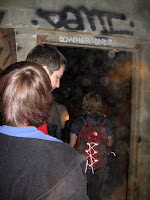 We had earlier learned a brief synopsis of a proposed alternative to the city’s plans to fill in the subway, one which was to restore the Erie Canal through the center of the city. Several groups have voiced their opinions of adapting the tunnels for use or even restoring Rochester’s rapid transit system. Most have been shot down.

Regardless of what plan you support or perhaps are indifferent to, the fact remains that downtown Rochester needs a shot in the arm. With the recent announcements surrounding the length of time it will take to see the Midtown Plaza project come to fruition, and all the Ren Square uncertainty, it’s truly an unsteady time for downtown’s future. Not only do we need business here, but we need people to want to live here. Sure, we need housing to make that happen, but we also need community to draw people into – community that is developed through arts and cultural happenings and places for people to gather.

So why am I telling you all of this? Because a current project in New York City somewhat parallels our issues and may serve as a positive model at which we can look for inspiration. This awesome project is finally coming to fruition through a long and arduous battle that has taken ingenuity, activism, some celebrity endorsement and old-fashioned elbow grease. I want to believe it is something we could accomplish here with a little bit of the right stuff.

For those not familiar, the High Line is a section of 1930s-built elevated railway on New York’s Lower West Side that was slated for demolition. It’s now been preserved and is being turned into a “park in the sky” much like the Promenade Plantee in Paris. The project has been ongoing for about a decade after a couple of local men – Joshua David and Robert Hammond – got together and started formulating plans to save the High Line. Their work attracted stars such as Ethan Hawke (who used the Paris park, incidentally, as a setting in the awesome Before Sunset), along with several other talented and dedicated activists who have committed thousands of hours to making this a reality – activists like my love, Edward Norton (seen in the photo below obviously getting ready to sing me a song of adoration because we are totally in sync with our thinking about our responsibilities to the world).

Contrary to what you might think, I swear I didn’t know about Ed’s involvement until I started reading more on this project. I was pleasantly surprised since it is also a fact that I will shamelessly take any opportunity to combine Ed and my work here at The Landmark Society. So yes, in addition to being that awesome-preservationist-green-living-Barack-Obama-documentary-
filming-person-with-the-right-ideals-who-inspires-me-everyday-
to-be-a-better-human-being guy, Ed has lent his considerable voice and clout to this project. You can see some of his work on the project here.

But I digress. The High Line project is a success story that has even spawned a new neighborhood. This article in New York magazine says it all: “The abandoned railroad that made a park…that made a neighborhood…that made a brand…” Just think of the possibility something like this could offer Rochester. Of course our version may not embody a plethora of green space (considering the majority of the subway is underground) however, I am sure that with the abundance of creative and artistic minds here in this city that a better use could be found for that space other than a dirt fill. 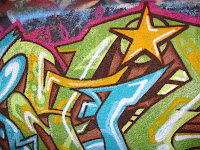 When the subway was closed down, a whole new landscape emerged in its place. There is art – seriously good graffiti art with use of color that will blow your mind. There is incredible light. There are plants sprouting up in places plants wouldn’t normally belong. There is life in these here tunnels!

Check out the snapshots in the slideshow below and then tell me that there isn’t potential for some seriously creative and innovative action to take place down there. How about a park in the area that is illuminated by the natural light from the arches of the Broad Street Bridge?How about an urban art center showcasing the creativity seen down there? How about some park space in the areas where the tunnels come out into the open sunshine? How about even a restaurant – think how lovely it would be to enjoy a glass a wine and a good meal while looking out over the river, bathed in natural light.

How about anything other than destroying this amazing place…?

I couldn’t help but emerge into the light and mourn the possible loss of this part of our history. I love this city. I want to see it become a place that can retain young, creative minds rather than further digressing into a springboard for young talent to jump onto other places. Enough with the business as usual approach. We’ve had enough promises of the “next great thing”…it’s time to make it happen. I’d love to hear your ideas of adaptive reuse of this treasure under our streets.

And, once again, Ed babe, if you’re reading, my offer of discussing these things over dinner and wine is still open. Call me.

Beneath these streets lies potential

2 thoughts on “Beneath these streets lies potential”