A Special Opportunity in the Susan B. Anthony District

By Conrad Floss, City of Rochester Department of Community Development, Bureau of Housing

Having traveled the east coat, I have visited many different towns, and especially enjoyed those that offered some sort of historic significance. One such place was Charleston, South Carolina. Having never visited a city with such an abundant collection of historic resources, I was astounded that such a place could exist, let alone be only a 16-hour car ride from home. Walking these streets was truly an experience for anyone taken back by historic mansions, rustic taverns, cobblestone streets, and horse and carriage passersby. More captivating was Charleston’s Battery Park, where a rich mixture of Victorian, Greek Revival and Italianate mansions line the boulevard overlooking the Ashley River. Of course, passion for old churches and creepy graveyards is essential to this experience accompanied by an evening ghost walk tour with a local story-teller. Absorbing all of this, I concluded that this was the place to be. I held steadfast that I would return here, if not make it my permanent residence.

When I left Charleston that fall of 1998, I did not know I would return five years later to celebrate my honeymoon, having just been married in the grand parlor room of the Hamilton Turner House in Savannah, Georgia. Savannah was another historic paradise I had heard about, located just south of Charleston. To historians, it is a must-see. Upon my departure from Charleston, I was determined to somehow get more involved in historic preservation upon my return to Rochester. Being welcomed back to City Hall to resume the mundane business of returning phone calls, answering e-mails, and fixing the City’s lead hazard control problem, that fortitude quickly evaporated. It only re-emerged several years later when an opportunity presented itself.

Last July, my supervisor unpredictably invited me into her office and asked me, if I were to take on something new, what would that be? Mulling this over for several minutes, I suddenly came to the realization that this was the time to see through my prior intentions. I replied by telling my Charleston story and asked if I could initiate some type of involvement with historic preservation. Perhaps I could engage Corn Hill or the Susan B. Anthony district, or dabble somewhere in High Falls. The response was overwhelmingly positive and I was given a green light to charge out of the gate. It was decided that my initial focus would be the Susan B. Anthony neighborhood.

My first thought about this newly assigned task was, ok, now what? Chief on my mind was how I would be productive in an environment I really knew nothing about. Historic architecture was about as familiar to me as the North Pole; I hadn’t the faintest clue about building restoration, and knew as much about Susan B. Anthony as I did Thomas Jefferson (I fixed that). Further down this insecurity was how I would be welcomed by the local neighborhood association. I heard they were a serious group and pondered how “the new guy from the City” would be accepted, especially someone not from the neighborhood. Like a fish out of water, I was somewhat reserved, but I soon got over it. I simply said to myself, oh well, just dive in, do what comes naturally, and try not to do anything stupid. 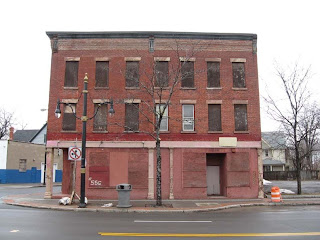 I figured to start this new project I should probably go for a walk and look at things first-hand. I looked at all the houses, sat in the park, waved to a neighbor, and gave thought to what a good starting place would be. My supervisor had previously commented on a need to market the City-owned 3-story brick building that sat vacant at Madison and Main Streets. Ok, I’ll start there. The initial thought was to undertake a request for proposal sale. This was something the City has done two times before, but achieved little success. Things would need to be done differently this time. Something, if successful, that might later serve as a model for how the City could re-develop historic buildings. In this pursuit, I gathered as much information about the building that was available and spoke to as many people as possible that knew anything about this place. I quickly came to the long-standing conclusion that everyone else had: we need to do something! I took an inventory of all the things that developers frowned upon during prior RFP sales and, one by one, attempted to unravel each of them. This was successful to some degree, but it was concluded that the building will always face certain challenges that can’t easily be solved.

Next, I collected information about funding sources available to developers that could serve as financial tools to make the anticipated high cost of renovation more palatable. The obvious piece that was missing in all this was some sort of professional document that could be given to developers to help them understand the building. In walked The Landmark Society and the New York State Preservation League. As luck would have it, they had funding available to undertake a Main Street project to study development possibilities for second and third floor re-use in historic buildings. These groups agreed to produce an existing conditions and restoration report for the building at 556 West Main Street. The Landmark Society subsequently contracted with Bero Architecture to produce this report and three months later the document was delivered.

The final step in planning the sale event was figuring out who would be available to assist developers with the City RFP process and navigate the other funding resources being introduced. Also, did we have a City steward available to developers to help coordinate the City’s review process for submitted plans? I thought, there should probably be a point person for all of this. As it turns out, it’s me.

Property showings for the sale will take place between August 25-29. Not only will we be showing 556 West Main Street, all other City-owned property will be available for viewing as well. This includes three residential properties at 54-54 ½ Madison Street and 2-6 Madison Street. We will also offer two vacant lots located at 20 and 42 King Street. The hours of the event will be Monday, Wednesday and Friday between 9-11a.m. and 2-4p.m. We will also schedule appointments for that week if requested. Proposals will be due back to City Hall, Room 028B by September 29th by 4:00p.m.

A Special Opportunity in the Susan B. Anthony District