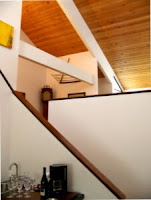 During a recent visit to one of the condos that began the housing renaissance of the Grove Place neighborhood in the 1970’s, a comment was made about the contrasts one finds in a building’s design when looking at it from both from the street and within its walls. The exterior is not always the best indicator of what’s inside. The townhouse we were visiting, from the outside, did not have a particularly warm or inviting look and from some angles more resembled a fortress than a home. Once inside, the contrast in feel and color became apparent. Twisting and tiered areas framed by exposed beams and topped with a cathedral ceiling of different angles joined by a vertical skylight created an interior as inviting and airy as its exterior was somber and insular. Wide interlocking wood panels that covered the ceiling provided welcome warmth and definition to a space so open and bright, without dominating it.

With this experience in mind, I turned my thoughts to the older, more distinguished buildings downtown, particularly the group of fine municipal and commercial structures concentrated around the Fitzhugh to to corridor. A veritable museum of the gorgeous and sturdy designs of the Warner family is there for the exploring. This father and son team seems to have been involved in most (if not every) important 19th century building in the 100 Acre Tract. We are fortunate that, with the exception of the former Rochester Savings Bank building, all of these buildings survive to this day with minimal alterations to their facades.A particularly rainy day served as an excuse to view the interiors of these historic buildings. I wanted to know how dry one could keep while taking in our most distinguished civic architecture, from “New’ City Hall to “Old” City Hall (). The experience was inspiring and relatively dry. The following is a mini-tour one can take on a rainy day during one’s lunch hour. Anyone within a few minutes drive of the Sister Cities Garage can park there and take this tour…..for free! All city garages give you the first hour free and since this is a lunch hour tour you should be able to park there without paying a dime. Please keep in mind that we live in a “post 9/11 world” and that we must respect the wishes and privacy of the owners and tenants when walking through their buildings. Most of the guards at these buildings are friendly so please ask first before going somewhere you might not belong and/or prior to any picture taking. Even the visits to public buildings should be approached this way.

Begin the tour by entering the Sister Cities Garage on and parking your car. Go to the ground floor and head toward the side of the garage. Exiting the garage, cross and enter City Hall through the arched main entrance. Ascend the white staircase in the lobby. You are now in the light court of the former built in 1884 and the only building on the tour that was not designed by a Warner. Originally a light well with a glass floor that was not open to pedestrian traffic it now serves as the central meeting place for public functions of the city government. A wedding was taking place when I visited. According to a clerk from the law department this area is often used for such functions due to its ornate and vertical Romanesque design. To experience a modern take on the courtyard return to the lobby area and head to the right, past the chrome streamlined payment counter to the hallway on its left. This will take you though the Annex Gallery to the lobby of the modern addition (Bldg. B). Take the steps down to the lobby, turn and step down a few more stairs and exit the glass doors into the outside courtyard that was created when the addition was built in the 1970’s. Head back to the lobby of the old building (Bldg. A). and enter the garage through the entrance to the left of its “plaza.” Walk inside the garage, along Pindle Alley and exit the doors to the alley on the south side of the garage.

The massive cast iron columns and transfer girder frame the entrance to one of the most important commercial buildings of its era, A.J. Warner’s Ellwanger and Barry building of 1888. Many alterations have taken place here in an effort to update the building for the needs of the modern office worker, most conspicuously the atrium that was built facing west to allow light into the offices. Once past the atrium look to the right to find the elevator lobby. A small room, the elevator lobby is a remnant of the original design of the building and features ornate copper/brass elevator surrounds and mail box. The staircase to the right beckons with its marble steps and finely crafted railings and leads to a narrow hallway that faces an external light court framed by the rear façades of the surrounding buildings. Exit to (you might need an umbrella for this short walk outside) and head south towards the , passing the monumental Greek temple designed by J.F. Warner to house the First National Bank in 1923. It is currently vacant and inaccessible to the public. 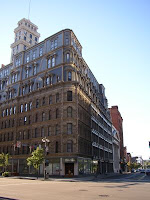 After passing the bank, enter the Powers Block through the cast iron portal on State Street. Follow the sign to the area of the building that was originally an open-air light court but now has a glass and steel roof and serves as an atrium for the second floor café area the tenants use for lunch and socializing. Continue through the large wooden double doors to the right of the café and follow the sign to the garage. From this glass-enclosed bridge you will get another interesting view of the rear facades of this cluster of buildings. Descend to the ground floor of the garage and head toward the short staircase along the southern wall, through the metal doors that open into the . Also known as the Powers Hotel, it was built in 1883 and was designed, like the adjacent Powers Block, by A.J. Warner. The interior has been altered beyond recognition from its use as a luxury hotel. The marvelous ceiling and wall wood paneling and the marble columns and staircase of its rotunda/lobby have been removed or covered during the course of its many renovations. There are a few remnants of the hotel’s glory days, when dignitaries and celebrities slept there. They can be found by looking through the glass doors of an office located near the Fitzhugh Street exit and the ceiling trim in the narrow hallway that bisects your path to the garage entrance at the north end of the hotel’s lobby. I have been told that the original columns can be seen in a few of the ground floor offices and in the basement but I wouldn’t suggest you go looking for them. There is a guard who will show these areas to you if you ask nicely, although he was not there the day I visited. 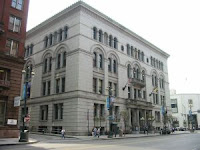 Exit the hotel and cross Main Street to enter the former 3rd Monroe County Court House, a renaissance revival masterwork of the younger Warner, J. Foster, from 1896. Now known as the Monroe County Office Building, it contains an atrium that to some outshines its counterpart on Church Street. Marble and wrought brass define this space and delight the visitor, who can ascend the double staircase to the second floor for a different perspective and to discover the recessed staircase that leads to the third floor. Words cannot properly describe the courtyard; it needs to be experienced in person.

Once back on the first floor, continue south to the annex that once was an open park in front of “Old” City Hall, fully renovated in the 1980’s for private offices and now known as Irving Place. The porch of the main entrance as it was designed by A.J. Warner in 1874 is still visible between the two buildings although its prominence had been diminished by the removal of the Erie Canal and the use of Broad Street as the main entrance. The checkered marble floor, Corinthian columns and wrought iron railings of its stairway at the entrance showcase the legacy of the aesthetic skill and workmanship of ’s architects and builders from the city’s beginning that I hope will continue into the 21st century.

Simply follow your route back through both buildings, cross Main Street and walk through the Powers Hotel to the garage and back to work with a dry head filled with the rich architectural history of the nation’s “first boom town.”

Note: We’re so pleased to have had Dan Palmer, Nimisha Thakur, and Jessica Belknap at The Landmark Society this summer, where the three of them completed an inventory of buildings from the recent past in downtown Rochester. Thanks for the great work!